We’ve talked before in this space about the struggles of the Disney studio in 1941. Pinocchio was a mild success, but not hugely profitable like Snow White, and then the expense of Fantasia had put the studio on some shaky financial footing. Then, the outbreak of war in Europe took that market away, the animator strike damaged the atmosphere at the studio and Walt began to suffer. 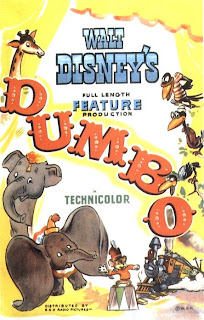 So it’s hard to figure out how, in the midst of all this turmoil, Disney came up with one of its most hopeful and inspirational animated features – Dumbo. Part of it was necessity, or course. Disney needed the revenue that a feature would provide, and director Ben Sharpsteen was told to make the film as cheaply and quickly as possible. It was conceived and animated in less than a year, which is remarkable in itself.

Perhaps, though, necessity was the mother of invention. I’ll fully review the film myself next week, but Dumbo is a simpler, cleaner and easier film to follow than Pinocchio or Fantasia. It’s really a character study on Dumbo, and that made it fun. 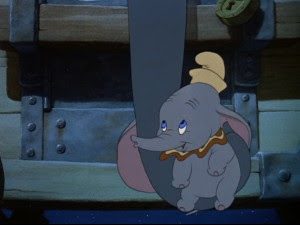 I’m getting ahead of myself, though. As mentioned, Dumbo was conceived as a film that would make a profit for the studio. To accomplish this, the film had to be scaled back from the expensive productions of the 1940 films, and even somewhat from Snow White. Backgrounds were ordered to be simpler, so they could be reused, and characters were easier to draw.

That said, it is on Dumbo that many feel that the Disney animators did some of their finest work. Bill Tytla on Dumbo and Ward Kimball on the crows are just two examples. The Pink Elephants on Parade sequence is phenomenal as well. 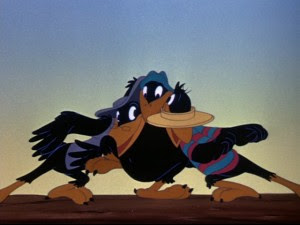 Dumbo, on its release, was successful for the company, almost doubling the money spent on it. It put the studio back into a decent position, and combined with Walt’s South American trip, was a shot in the arm going into the World War II era. The future would bring occupation of the studio by the military, and the war even bumped Dumbo off the front of Time Magazine, when the Pearl Harbor attack took the front page.

It’s worth noting, I guess, that Dumbo was only 64 minutes long. This was an issue with Disney’s distributor, RKO. Most films were at least 90 minutes, if not longer. RKO wanted Disney to trim the film to 30 minutes or expand it so that it would be a better feature. Disney refused, though, and RKO released Dumbo as intended.

Dumbo would be the last “original” feature for a while. After that, the war impeded Disney’s efforts to do full length films. Package features would become the new normal for a while, including efforts spawned from the South American trip. But all that in good time. First, we’ll talk about the artistry of Dumbo. Next week, the review!