The year of 1941 was not the first time that the Disney Studio was in financial trouble. It was the first time that I can see that it caused Walt and his team to start making compromises with the product, however. Things that they had to do to make money began to take precedence over what they wanted to do artistically. The Reluctant Dragon, a package of shorts masquerading as a feature film, was one of those things.

Walt and his studio needed money, because World War II had dried up the foreign markets, and with other developments (strike, poor box office for Fantasia), he had to get it in an efficient way. The result of this was creating The Reluctant Dragon, a feature that saw a live action framework installed over several shorts, creating a patchwork movie. 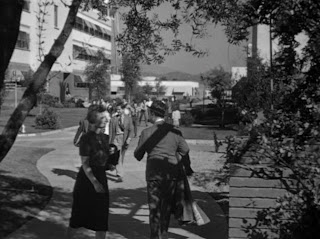 Humorist Robert Benchley provides the framework, as his badgering wife pushes him onto the Disney lot, to pitch Walt on the story of The Reluctant Dragon as a potential feature film. In his wanderings around the Disney studio, he learns about the various things that go on in the production of animated films, and sees many different products along the way.

As I said, the framework is really secondary to the shorts contained therein. There are four shorts in the film, although there are some other bits of animation (such as Donald Duck coming to life on the drawing board or a “flip book” of Goofy) scattered throughout.

The first short that Benchley sees is a snippet of Casey Junior, the train from the then still in production Dumbo. As he enters the sound stage, a young woman is recording the dialogue for Casey, while sound effects men are laying down their soundtrack as well. The film cuts between the footage of Casey and Benchley’s reaction to it. It’s a neat look at the character of Casey Junior, as he chugs through the countryside, facing down tugboats, rain and bridges in his way. 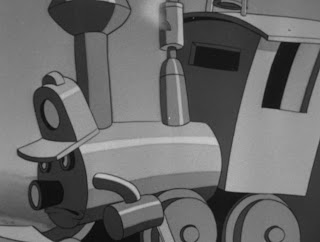 The best thing about the Casey Junior sequence is how it highlights part of the animation process – the sound. The same can be said for the second short, Baby Weems. The story of a young infant who turns out to be a prodigy is told through storyboards, put together to have minimalistic movement. It’s quite a change for Disney, which has always to this point emphasized realism and motion. 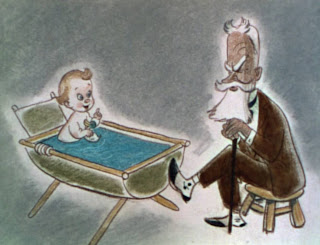 Baby Weems does neither. It is a deliberately sparse and cartoonish piece of work. But it is fantastic. It goes on much longer than most shorts, but is so entertaining. The ultimate story of how the baby cannot be normal, and is never with his suffering parents, to the way that he is reunited with them is heartwarming. It’s a glimpse into the future of animation with the UPA and other minimal styles to come.

The third short is also a glimpse into the future. Goofy shows up when Benchley enters the animators’ room, and Ward Kimball and the boys treat him to How To Ride A Horse, a more streamlined version of Goofy’s “How To” shorts. We saw this in Goofy’s Glider, but this is a more realized version of the series. These Goofy shorts are my favorites, and are among the funniest done by Disney. 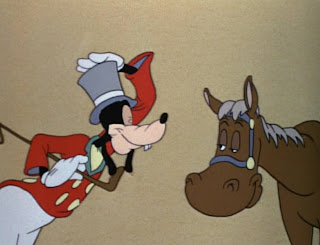 The final “short” is the story of The Reluctant Dragon. I put short in quotes because it’s really a short feature, instead of a traditional 7 or 8 minute short. This is a nearly 30 minute long piece that spends a lot of time with the characters. To my mind, it’s also where the movie falls flat. 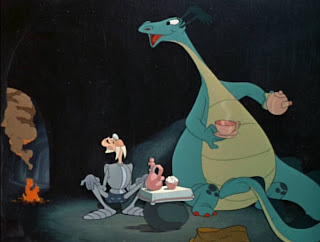 It’s not, and that was the problem. There is a boy who serves as the bridge between Sir Giles the dragon killer and the dragon, but he’s woefully underdeveloped and uninteresting. The whole thing really fell flat for me, because the dragon doesn’t seem like a “realistic” character, and the whole bit was somewhat absurd. If it was a 10-15 minute sequence, fine, but it just kept going too long to maintain credibility.

The most interesting part of the film for me was that we get to see a glimpse behind the curtain at Disney. In years to come, this would be commonplace on Walt’s TV shows, but this film shows us what that will be like. Now, it’s not all realistic, because Walt valued entertainment over accuracy. But, for a first glimpse, it’s pretty good. 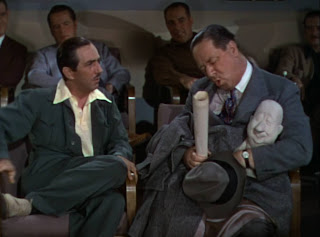 Plus, we get to see Walt himself at the end of the film, and he’s far from the “Uncle Walt” we would come to know later. This is a thinner, younger Walt, who is not quite the genial old man we would see on TV. He’s not mean or anything like that, but just different. The whole film is like that – it’s not Disney’s best work, but it provides a great look at Disney in 1941, and such a glimpse is very rare.