Mickey has been a secondary character in much of the late 30s and early 40s. Even his appearance in Fantasia was not as well received as Walt had hoped, and did not lead to a new renaissance for the character. So it’s interesting to see him in Canine Caddy with Pluto, a short that really doesn’t break new ground, and is more traditional than previous shorts. 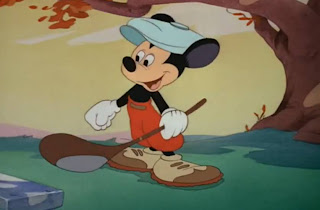 The set up is Mickey coming to the golf course to play a round, with Pluto serving as his caddy. Simple enough, but there’s no real suspense or surprise to the short that makes it remarkable. What would you think will happen when Pluto is Mickey’s caddy? He chases a gopher, has issues with the game and ends up ruining things. 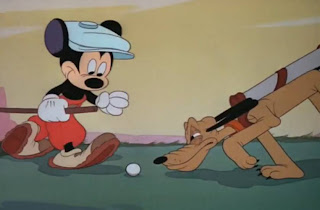 Now, just because a short is predictable doesn’t make it bad. Canine Caddy is well done, at least from a visual and artistic standpoint. Mickey’s animation here is very fluid, and his emotions and movements are fantastic. Pluto is the same, and the backgrounds are great, too. 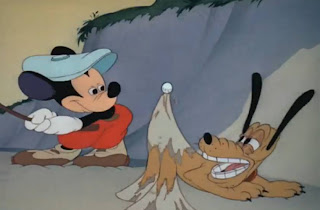 Really, the problem I had with this short is that there’s not enough meat on the bones. You have the basic premise of Mickey playing golf, and there’s some cute gags with Pluto setting up the “tee” of dirt or Mickey having to hit the ball off Pluto’s backside. But there’s no conflict for Mickey, and Pluto is really only troubled by the gopher in the latter part of the short. 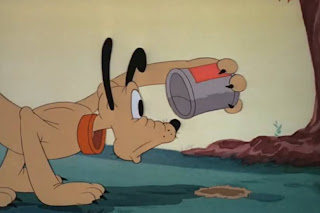 It’s no surprise to see Mickey sidelined for much of the short. After all, that’s what happens to him in most of his shorts, especially when Pluto is around. But even Pluto doesn’t step forward in this short and provide some truly funny moments. It’s good enough, but Canine Caddy doesn’t provide the laugh out loud gags that have been in recent Donald or Goofy shorts. 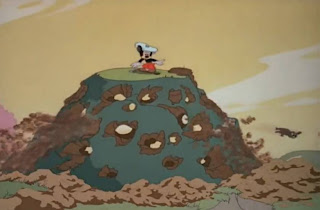 I think the issue is that the animators might be used to setting up situations for the other two characters. This short could easily have worked well with Donald or Goofy, but in different ways. Donald would have gotten increasingly frustrated with Pluto’s efforts and gotten funnier with his increasing frustration level, and Goofy would have tied himself in knots trying to play. But Mickey? What does he do?

That’s the problem facing Disney at this time in 1941. With animators unsure what to do with Mickey, he’s forced into situations that don’t fit him. Add the mounting pressures to increase production, the increase in feature films, the mounting war and the labor strife, and it was a rough time to be producing films at Disney.