Yesterday, we saw Donald at his finest, in a solo setting. Alone in a room, the animators managed to turn Donald’s struggles with going to bed into a great bit of comedy. Today, we get to see how he plays off others, specifically his nephews, in Truant Officer Donald. 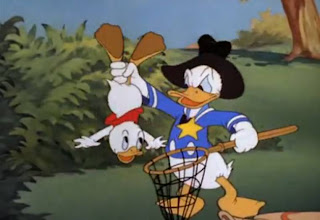 From a pacing and story standpoint, this is a very, very strong short. Donald starts off with a clear objective – getting the boys into school – and pursues that goal vigorously throughout the short. And as things go on, the obstacles get bigger and bigger, until he finally reaches his goal. It’s exactly what you would want any good writer to do. 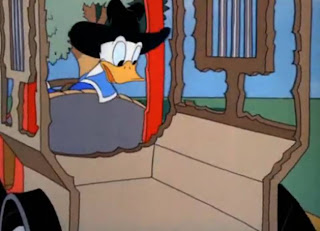 I still can’t distinguish between the nephews, but I don’t think that’s important for their comedic value. In fact, it’s probably better that way. Donald doesn’t show favoritism to any of them, as he uses a net and a suction gun to capture them initially. Donald’s gadgets are a fun addition to the short, and seems to foreshadow some of the things to come in the Duckverse many years later (Darkwing Duck for one example.) 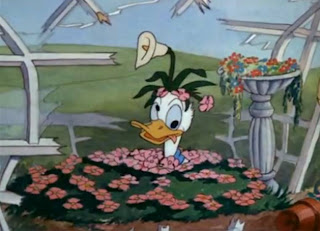 The boys breaking out of the truancy van is also a great bit. The timing is crucial, as we see the boys bust out their Swiss Army knives, then the van goes through a patch of trees, and we see nothing. When the van emerges on the other side, it has not back anymore, and the boys are gone. It’s a subtle thing, but the easy way out would have been to just show the boys sneaking out the back. Using it this way, with the obscured view, was much funnier.

The second half of the short shows Donald trying to coax the boys out of their clubhouse, using a variety of methods. Things escalate like crazy. It gets to the point where Donald tries to smoke them out, by setting a fire outside the door. That’s where I think things get very creative. 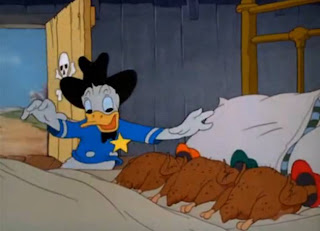 The boys decide to hide some conveniently placed nearby roasting turkeys in their beds, so Donald will think he has roasted them. Seeing Donald’s reaction when he comes into the room and sees the roasted birds is priceless. But as always, the boys go one step too far, dusting one of them with flour and posing as an angel, which Donald sees through eventually. 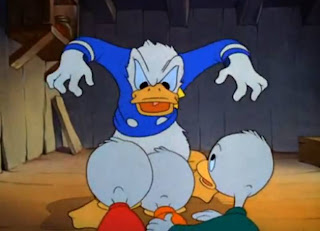 The shot of Donald coming forward and menacing the boys was a favorite of mine. Unfortunately for him, when he finally has them rounded up, he heads to the school, only to discover…well, you need to watch it to see, but it’s a perfect comic ending to the short. Don’t miss this one if you want to laugh.