The best Disney features are those that induce an emotional reaction in the viewer. Whether it’s fear from the Evil Queen in Snow White, joy when Pinocchio and Geppetto are reunited or awe at the artistry of Fantasia, it is that visceral reaction that makes Disney films so unique. Dumbo is no exception to this, and in fact could be the most emotional film that Disney made.

We spoke before about the limitations placed on director Ben Sharpsteen – he had to keep things simple and keep the budget down. Perhaps it was the limitations that forced him to make certain choices, we don’t really know. But the resulting film is a masterpiece of storytelling, that evokes real, raw emotions in a multitude of scenes.

The story of Dumbo is a simple one – an elephant born with unusually large ears is ridiculed until he learns to use his ears to fly. The telling of the story, though, is an emotional roller coaster, from the depths of despair when Dumbo’s mother is taken away from him, to the highs of seeing Dumbo fly through the air.

Some of the choices made in the telling truly make this film unique. The first is the fact that neither Dumbo nor his mother speak in the film. While the other elephants gossip and carry on, Dumbo and Ms. Jumbo do not. Therefore, their emotions and thoughts have to be communicated through their actions and their eyes. It works beautifully, such as when Ms. Jumbo lashes out at the kids teasing her baby, or especially during the elegant and beautiful “Baby Mine” sequence. 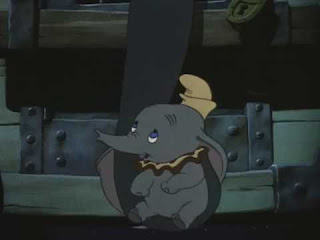 The second choice that I thought was very unique was that few of the humans in the piece are very developed. The circus hands are faceless drones as they set up in the rain, and with the exception of the boys teasing Dumbo or the ringmaster, none of the other humans are real characters. It helps to put the highlight on the animal characters, and especially Dumbo. Sure, this was probably a time saving device, but it works.

There are just so many outstanding sequences in this film, that it’s a true credit to the Disney staff they were able to get it done. With restrictions in place, to turn out a sequence like “Pink Elephants on Parade” is amazing. It’s very much like a piece from Fantasia inserted in the midst of the story, but it works! Not only does it work, it works well, serving as a bridge between Dumbo drinking the contaminated water and ending up in a tree. 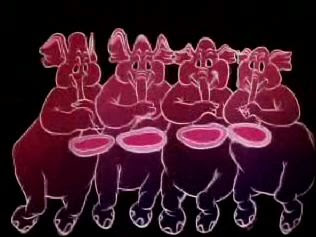 Dumbo also has some interesting sociological and controversial elements, if you look for them. The faceless drones who put up the circus tent are obviously African-American, and sing a song about how they throw their money away and are “roustabouts.” The crows, who end up helping Dumbo fly, are caricatures of African-American attitudes of the time, if seen through one prism. And the clowns, who end up dumping booze in the water Dumbo drinks, are making fun of the striking animators. It’s a credit to the film, though, that these things do not distract from the main story’s impact. 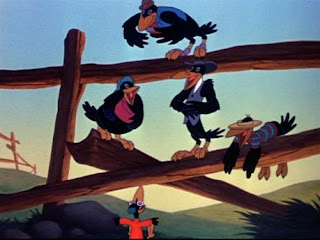 At its heart, Dumbo is a story about overcoming obstacles and succeeding in spite of them. It’s also a story of love, and how belief and love can help overcome those obstacles. In the end, though, it’s just a fantastic story, and a beautiful film. One of my absolute favorites, and a film that does not get enough credit for how wonderful it is.