Donald making waffles. That alone makes Chef Donald a freakin’ awesome short. I love waffles, I love Donald, so this makes for a great short in my eyes.

Chef Donald is a classic example of one type of Donald short – Donald on his own, trying desperately to complete some sort of task, against the advice of either his better nature or some outside influence, in this case a radio. While Donald is scrapbooking, the radio entreats him to make waffles, leading to visions of a piping hot waffle and ultimately to cooking. 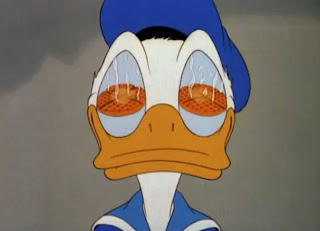 Remember how I mentioned Donald was scrapbooking? The only issue he has is that he leaves the rubber cement on the table, and well… 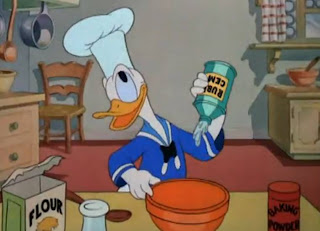 You can see where this is going. The dough turns into a sticky, viscous substance, and thwarts Donald’s every effort to make it into waffles. It’s another way to have Donald’s frustration build and build, going from a simple situation to an absurd one. That escalation is what makes Donald so unique. 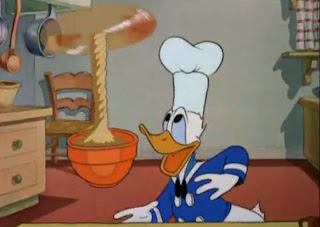 This is very much like one of Goofy’s “How To” shorts, with the radio providing the narrator voice, but instead we have Donald going farther and farther to make his point. I personally lost it when Donald ended up with an axe, trying to chop the dough up. It backfires, of course, leading to a massive crack in Donald’s house that spreads quickly. 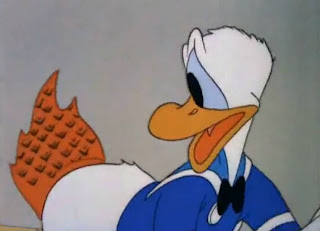 This is just a flat out funny short, because Donald is so hyperactive throughout. Even when he gets his tail caught in the waffle iron, it’s more funny than painful, at least for the viewer. It’s where the animators do some of their best work – pitting Donald against something that isn’t really fighting back, but thwarts his efforts all the same. 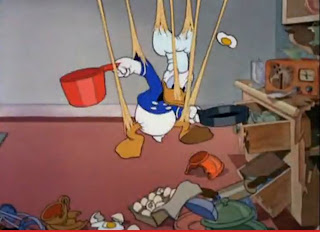 As I said…I love Donald, and I love waffles, so I loved Chef Donald. This is one of my new favorites.