I have had trouble sleeping in the past. Those who know me will not believe it, but I have to get to a deep sleep early on in the night or I am restless all night. Therefore, I could completely relate to Early To Bed, the latest Donald Duck short. 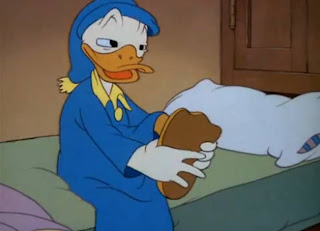 This short was sort of the animators’ version of a locked door mystery, in that Donald is alone in a room, and never leaves throughout the short. You have to admire the fact that all the comedy in this short is created only in the confines of Donald’s bedroom. It’s quite the feat that it is as funny as it is. 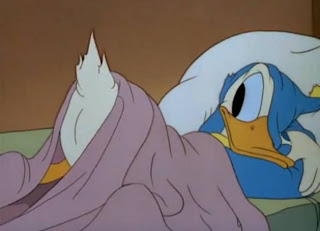 Donald, deciding to turn in for the night, gets menaced by a ton of distractions, not the least of which is a ticking alarm clock. This was something I could definitely relate to. I’ve laid in bed dozens of times, with everything else silent, and been denied sleep because of the consistent sound from one object. Donald being Donald, though, he takes it to extremes. 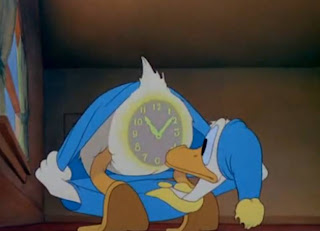 His attempts to get rid of the sounds from the clock are classic Donald. The rest of us might attempt to move the clock, or turn it off, but Donald, of course, takes it to the next level. He buries the clock in a drawer, throws it out a window, and ends up swallowing it at some point. Even then, he doesn’t give up and whacks the clock in his rear against the wall, using a variety of methods. 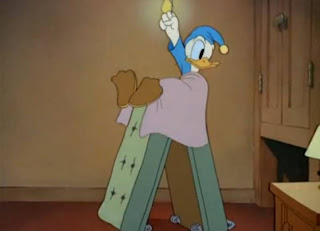 That sequence alone is really funny, but there’s more involved. That makes this short go from good to great, in my opinion, because the gags could have been all in one place, but by giving the viewer variety, it improves exponentially. 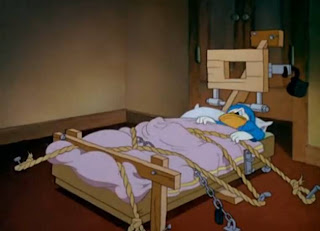 The gags from that point are pretty good, like the bed folding up on Donald. It’s a fantastic use of dramatic pauses, as the lights go out, then come up and all of sudden Donald is folded up in knots. It increases the comedy and makes the question of whether Donald will get to sleep even more in doubt.

There’s not a great innovation in this short or any sort of artistic achievement to point to, but Early To Bed is very, very funny. It’s just Donald, on his own, in a situation that many of us have been in, and he takes our frustrations and acts on them to the next level. It was fun, and a great time watching Donald.