I’ve said it before and will say it again, Donald works best when he’s put in a perfectly innocent situation, but things conspire against him to keep making it a frustrating situation. Donald’s Camera is a perfect example of that, and it’s a fantastic short that I had never seen before.

The opening for this was particularly fun, as it featured Donald doing something he normally does not do – being conscientious. After seeing a sign advising him to shoot nature with a camera, not a gun, Donald proceeds out to do just that. Again, a simple thing, that should be fun and enjoyable, but not when Donald’s involved. 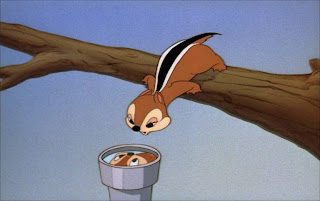 A sighting of note happens almost immediately. The first animal Donald attempts to take a picture of is a little chipmunk with a black nose. It looks like a female, but in most other ways, is likely a forerunner of Chip, who will soon come to menace Donald in other ways, with his partner, Dale. 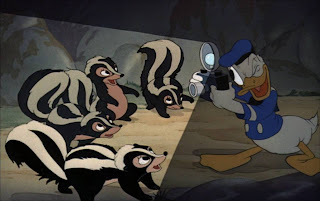 The chipmunk, though, is only a minor annoyance to Donald in this short. He can’t quite get a shot of the chipmunk, and turns around to see the forest creatures laughing at him. Donald chases them through the forest, ending up dropped in a pond. But he does a funny bit then, throwing the camera into the air, and catching it before it lands in the water. It’s a small thing, but sets up some emotional resonance later in the short. 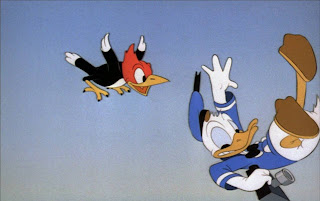 After that, the rest of the short is a confrontation between Donald and a woodpecker. He tries to climb up a tree to get the woodpecker’s picture, but in a classic gag moment, the woodpecker lures him off the end of a branch, causing Donald to fall. It’s an easy gag, but still funny.

Donald tries a couple different approaches to getting the woodpecker’s picture, such as pretending that some toothpaste is a worm so he can trap the little guy. But the best interactions come after that, when Donald and the bird get into a pecking match. The woodpecker pecks Donald on top of the head, and Donald returns the favor. 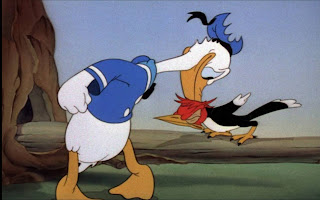 It’s so great to see Donald matched up with an equal adversary. Usually, his antagonist is someone who’s well intentioned or just having a good time that interferes with him. Not this time. The woodpecker is out to get him, as evidenced by the last sequence of the film.

Stealing Donald’s camera, the woodpecker pecks a carve out in a tree and slides the camera in it. The carve out is done at an angle, so the tree would fall on the camera. Donald rushes to save it, even calling out “Don’t do that!” as the woodpecker jumps on a branch to try and cause the tree to fall. It’s where the water moment came back for me, as I didn’t want Donald’s camera to get smashed. But it did. 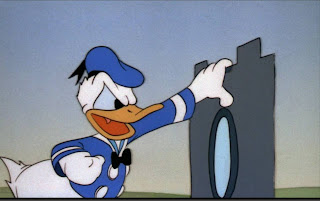 Donald’s anger turns to determination as he quite literally turns into a lightning bolt and zips back to town to grab an arsenal to hunt down the woodpecker. It makes this short delightful to see his turn from nature lover to hunter and see the root cause of it all. I loved it, and you will, too.