Pluto is a character that presents animators with a set of challenges. Since he’s a dog, he does not act like a human. Well, Goofy’s a dog and he acts like a human, so it’s a little more nuanced than that, but you get the idea. Pluto must move like a dog, and since he doesn’t speak, he can’t get emotions or thoughts across through words. It’s because of that the animators use different tricks to show us Pluto’s thought processes.

The most common of these is the use of the angel and devil Pluto, playing out a scene from both angles, advising Pluto what to do. In Lend A Paw, we see probably the most memorable version of this trick. It’s a short that I remember fondly, even if I can’t recall where or when I saw it first. 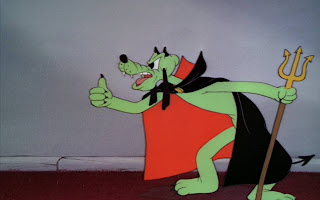 The whole thing is meant to demonstrate kindness to animals, which is funny since it’s Pluto, not Mickey who ends up being kind to the stray kitten. When he hears a meow from a bag floating down the river, Pluto rescues the kitten, who then follows him home. Pluto’s rescue across the ice flow in the snow is a great scene, with some nice animation. 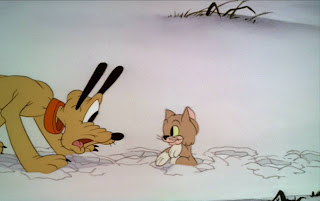 The real trouble starts when the kitten follows Pluto home, and suddenly is a fair haired child for Mickey’s affections. That’s when the angel and devil come out, to tell Pluto to either be nice to the kitten or to get him kicked out, respectively. The devil has a nice tough guy voice, while the angel is more of a high pitched, shrill voice. 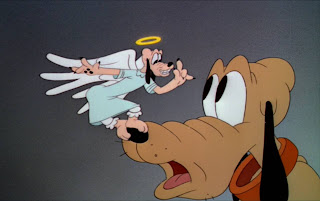 Pluto sets up the kitten by placing it on the table next to the fishbowl. Cats being cats, the kitten reaches into the fishbowl to try and nab the fish, causing a big commotion and things to come crashing down. The aftermath of that, when Mickey comes out to survey the scene is a favorite image of mine. 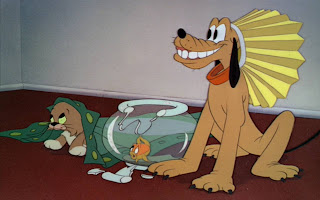 Pluto gets kicked out of the house after the fish turns “stool pigeon” in the words of the Pluto devil, and is left out in the snow. What I love about this short is although it’s obvious, it goes for the satisfying story, not the cheap gag. There could be tons of great gags of Pluto trying to get back in the house or doing something funny outside, but instead, he saves the kitten from drowning in the well. 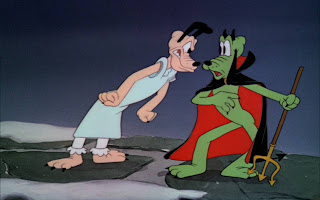 The kitten jumps into the well by accident, and Pluto has to fight off the devil to get the kitten out. It’s a fantastic scene, that really examines Pluto’s character, and shows us why he’s a good dog after all, despite the trouble he causes. Normally, I don’t enjoy the angel/devil device, but here, it works to illuminate Pluto, not diminish him.