1941 is such an interesting time in the history of the Disney studio, as it truly marks a change in the way business was conducted. The “failures” of Pinocchio and Fantasia left Walt and Roy strapped for cash, so you saw things like The Reluctant Dragon, designed to make use of shorts and dip a toe into live action. Dumbo was created for less money than the other features, and with the exception of Bambi, future feature productions were slowed or retooled. 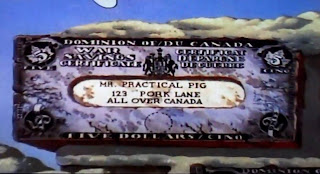 This doesn’t even touch on things like the animator’s strike or Walt’s trip to South America, both of which would change things in the studio during the years to come. Then, there was World War II, which was just then beginning to involve the United States. After Pearl Harbor, Disney would take a lot of work from the government to help with the war effort, but even before that, Disney took a contract from the Canadian government to join in the war. 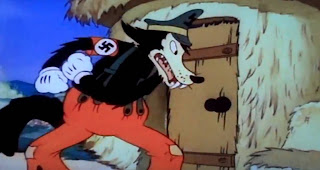 The first of these efforts was The Thrifty Pig, a virtual remake of The Three Little Pigs, only with the aim of getting people to invest in war savings bonds. As such, the plot is retooled, so that Practical Pig’s house is reinforced with war bond “bricks,” and the wolf is portrayed as a Nazi. 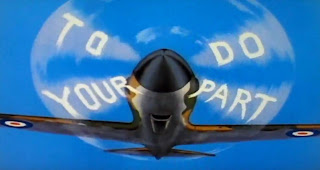 Most of the rest of the short is unchanged from The Three Little Pigs, until you get to the end. Then, there is new footage that dramatizes the need for savings bonds, showing how they will win the war effort. The bonds transform into planes or tanks, and propaganda sayings appear on the wings of planes or through bullets shot at the screen. 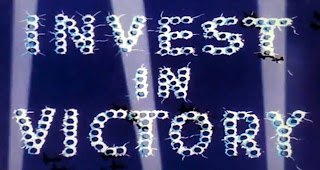 It’s quite a departure from the fairy tale and fantasy tales we’ve seen from Disney before. There is more like this to come as Disney gets more and more into the war effort, especially when Victory Through Air Power is made. But for now, Thrifty Pig is an interesting look into Disney on the verge of entering World War II, released only weeks before the attack on Pearl Harbor.