We’ve seen Donald in many different roles – Romeo, “loving” uncle and performer to name a few. In Old MacDonald Donald, though, we see him as a farmer, another role for this versatile duck. It’s an interesting take on Donald, but one that lends itself to his ideal situation – to get increasingly frustrated throughout the short. 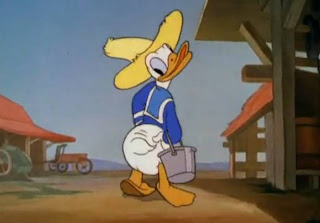 The opening scenes of this short are simply a “music video” with Donald singing “Old McDonald.” As he sings, he tends the farm, wiggles his tail feathers, and exhorts the pigs and other animals to join in the song. It’s a cute piece, and does the job of setting the scene very well. You get a great sense of Donald the farmer as a carefree guy just enjoying the fresh air and tending his livestock. 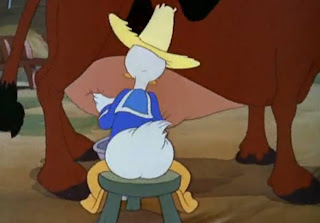 It’s when Donald gets entangled with his dairy cow, Clementine, that things get interesting. The animation does a fantastic job of setting up Clementine as a character. We first see her up in a tree, which seems so odd, but then seeing her float down to Earth, you instantly get an idea of who this character is. Clementine is a gentle cow, happy to help, but as you can see from her expressions, always ready to cross over the line to mischievous. 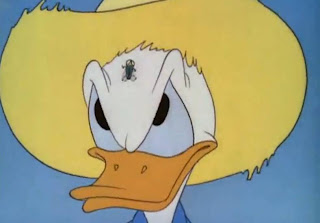 The milking goes fine for a moment, until a fly shows up to bother both Clementine and Donald throughout the rest of the film. The fly is a daring antagonist, buzzing around Clementine’s nose until she ultimately swats at him, hitting Donald instead. As usual, though, Donald escalates things to a dangerous level.

The funniest bit is when Donald starts getting mixed up, and ends up with his straw hat under Clementine, the stool on his head and sitting on the milk bucket. You can see where this is going, right? Sure enough, the milk ends up dumped all over Donald’s head, after some hilarious quick switcheroos. 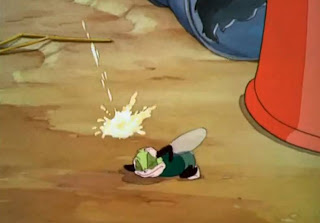 My favorite bit, though, was when Donald began aiming the cow’s udders at the fly, shooting milk like weaponry. It’s so ridiculous that it is perfect for Donald. Only he could get away with something like that. In real life, cows would knock you senseless if you tried that. 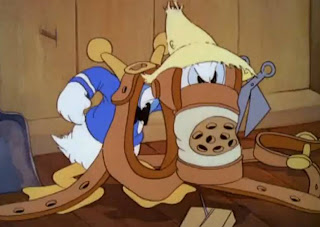 Donald ends up as usual, knocked silly because he overdoes it. The fly manages to get loose and bite Clementine, forcing her to kick Donald and send him flying into the barn. The closing scenes show both Clementine and the fly laughing. It’s a classic end to a short that is quite funny throughout, and well worth watching.