Babes in the Woods

We return to the Silly Symphonies today, and also return to color, after the brief detour into black and white for Bugs in Love. It’s also a return to fairy tales, as Babes in the Woods, today’s short, is a retelling of Hansel and Gretel, with some added twists.

The short uses a framing sequence, which is something new for the Silly Symphonies. We are greeted by a scene of Witch Rock, a very idyllic scene as nature frolics around the rock while a singer expounds on the scene. We are told that we will learn how this rock came to be, and that is what the story is about.

The meat of the short is driven by the titular babes in the woods, who are Hansel and Gretel, even if they are not named. They are weak character designs, in my opinion, with mere dark circles for eyes and mouth, similar to the mermaids in King Neptune. This limits their facial expressions, which is critical to human characters. Despite that, some great visual gags of having animals form scary faces on the trees and ground get the point across that they are terrified of being in the woods. 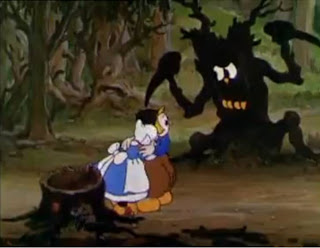 This is a precursor of sorts to a similar scene in Snow White and the Seven Dwarfs, when Snow White runs through the woods and is terrorized by floating logs that look like alligators or trees that look alive. Interesting to see it utilized here first.

The babes come across a group of gnomes, in a departure from the Hansel and Gretel tale. They befriend the gnomes, engaging in some serious partying before the witch breaks things up. Just a fun note – the song the gnomes sing as they dance around the babes is very similar to “The Merry Old Land of Oz” from The Wizard of Oz film that is still 7 years away from being made at this point. I don’t believe that there’s a connection between the two, but just found it funny. 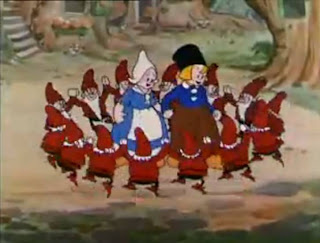 The kids are lured away by the witch, apparently unfazed by the fact that the gnomes scattered and hid when she appeared. It’s pretty funny that the kids don’t worry about that and get on her broom anyway, merely for the promise of some candy. The candy house is there, of course, but it’s a trap, as the witch draws them inside to torment them. 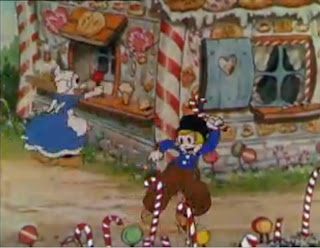 The scenes with the witch in the house are very dark. She introduces the kids to the snakes, spiders and rats that she has turned other children into, and transforms the boy into a spider. It’s quite scary, and shows a side of Disney animation I don’t think we’ve seen before. 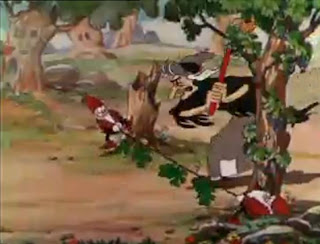 The gnomes come to the rescue, of course, in a scene reminiscent of the many insect/animal charges we have seen in other Silly Symphonies. The Witch Rock gets formed when our heroes transform the other kids back into their human selves, and they manage to have the witch fall into a vat of her own potions. She creeps her way across the screen, ending up as the rock from the beginning. 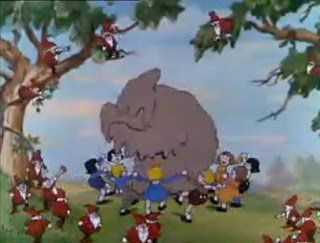 The use of the framing device is very well done, and it makes the story complete. I have to say that the use of color really makes a difference here as well. It’s the first time I felt that this short could not have been done without the color. That was not the case with earlier shorts. All in all, a very solid effort by the Disney team.