What to say about Trader Mickey? It’s definitely a classic Mickey short, in the sense that it follows along with many of the things you’d expect to see in a 1930s Mickey cartoon. But it also harkens back a bit to some earlier shorts, giving us a little more music and frivolity than we have seen in a while with Mickey. It all comes together to make a fun little seven minute package.

The basics are that Mickey is a trader, bringing instruments to the dark jungle on his boat, when he gets captured by cannibals. The opening sequence, with Mickey and Pluto on the boat, is a delight to behold. There is so much kinetic energy there, with hippos popping up around them, Pluto barking at the water and the movement of the boat. It’s a fantastic piece of animation that shows what the animators are capable of doing. 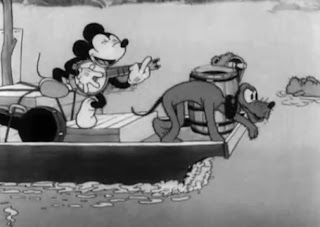 Once captured, though, this short runs in familiar territory. In many ways, it’s similar to Alice Cans the Cannibals, but really borrows more from Cannibal Capers, the early Silly Symphony. The characters in this short could have been borrowed from Cannibal Capers, with the exception of the chief and a couple others. That doesn’t detract from the fact that they are good designs. 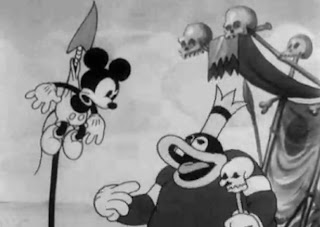 The cannibal characters start raiding Mickey’s boat and stealing his instruments, but they don’t know ho to use them, which leads to some very funny gags. The chief wears a corset on his head, a cannibal blows into a violin, another sticks his head in the wrong end of a horn and so on. Each one is better than the last. The comedy builds throughout the sequence in inverse proportion to the danger of Mickey being placed in the soup pot. It’s a great contrast, with the hilarity of the cannibals masking the danger of Mickey about to be eaten. 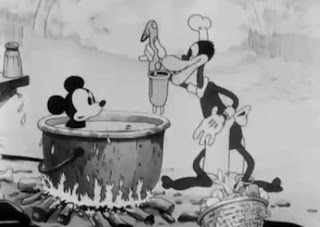 The last half of the short, though, is a throwback to earlier Mickey shorts, featuring an extended musical sequence. But it’s done in a clever way, as Mickey steals the saxophone from the cook and begins playing it to divert the attention of the cannibals. It works, as the chief starts tapping his feet and playing along, and soon everyone joins in. 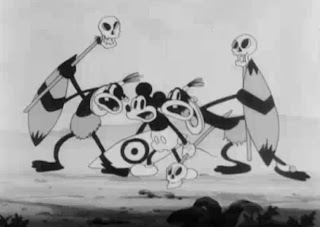 The continued misuse of the instruments by the cannibals as they join the musical sequence provides great comedy, and the visuals of having Mickey dance with the cannibals is pretty funny as well.

The ending comes with the chief joining Mickey in a dance and falling backwards into the soup pot. It’s another fun visual in a short that is full of them. This short reminds me of the early shorts, in that the focus is on gags and fun visuals, even though there is a good story involved. It contributes to the sense of fun all throughout the short. 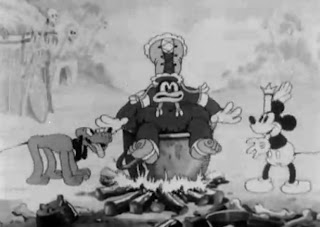 Trader Mickey might be my favorite short of 1932 so far. It’s funny, features great characters, and has striking animation at times. This one is highly recommended.