For some strange reason, the latest Silly Symphony, Bugs In Love, returns to black and white, after the advent of color with Flowers and Trees and King Neptune. Despite that, it remains an extremely entertaining short that features some top shelf animation.

In truth, this short is really a remake of The Spider and the Fly, an earlier Silly Symphony that also focused on bugs (flies in that case) falling in love then being menaced by a large adversary. In that case it was a spider, but here it is a crow. Then as now, the other bugs rally behind the young lovers to defeat the villain. 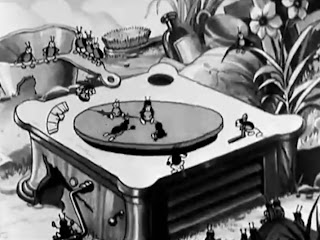 The opening of this short shows the bugs at play, and it’s a fascinating piece of work. We see the bugs making makeshift amusement rides from corsets, record players and a plethora of other devices. It brings to mind not only the Pixar film A Bug’s Life, but the real life representation of that film, A Bug’s Land, at Disney’s California Adventure. Again, one always has to wonder how much inspiration for later Disney projects was drawn from these early films.

The young lovers in this case are great characters. The female bug plays hard to get a little, flying into her home to put on makeup, apply lipstick and wait for the male to come and woo her. The personality oozes from both of these characters, in some really fine work by the Disney staff. Without either of them uttering a word, you feel their affection for each other. Okay, they may write words, but the tale is told even before that happens. 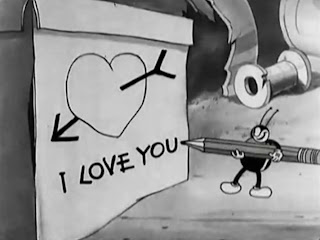 The crow that comes in to attack the two is a masterful villain as well. He is instantly recognizable as the bad guy, and the sense of menace is palpable when he shows up. The crow’s movements and attacks are realistic and terrifying. He manages to lock up the male and chase the female across her home, knocking furniture flying along the way. 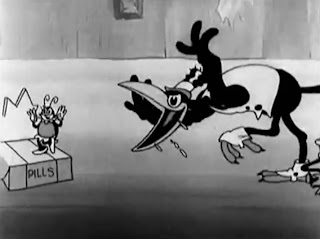 The bugs attacking the crow is really the weakest part of the short in my opinion. It could be because we’ve seen it so many times before, but the intensity seems lacking in this one. 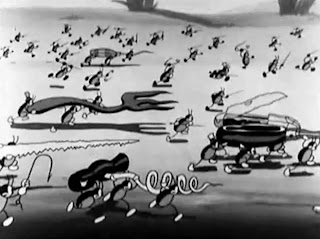 It’s interesting here that the male bug is not the dominant figure in the short. Usually, in this style of Disney short, the male saves the female from the dangerous villain, but in this case, that doesn’t happen. The male gets bottled up, literally, at first, then once he’s released he gets captured in an eye dropper. It’s the work of the bugs at large and his woman that gets him out. 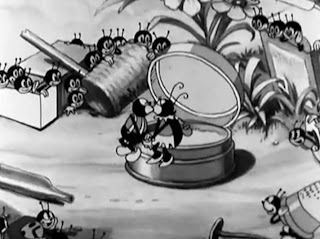 The final scene ends up with the two love bugs kissing in triumph. The work in this short on these two characters is fantastic. As a viewer, you find yourself rooting for them throughout and hoping for the best. They end up together, as in any good Disney short, and you end up with a very emotionally satisfying and consistent ending. Bugs in Love is just that – an emotionally satisfying short that features some very nice animation.