In almost every respect, Mickey’s Revue is a short that relies on taking pieces from previous shorts and redoing them, making it extremely derivative. It’s almost exactly the same set up as previous Mickey shorts like The Barnyard Concert and Mickey’s Follies. But there’s one major difference in this short that makes it significant in Disney history. 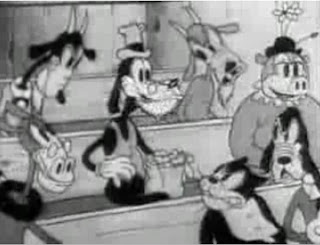 Yes, indeed, the Fab Five is almost complete, as Goofy makes his first appearance in Mickey’s Revue. At this time, the animators referred to him as Dippy Dawg, but he would soon become known as “The Goof” and later, Goofy. In this short, Goofy’s role is limited to sitting in the stands and giving off an annoying laugh in between segments, but it’s the only original piece in the whole short.

In fact, in several places, it looked like the Disney team reused animation from The Barnyard Concert, such as the scenes of the audience applauding in rickety balconies. The acts that Mickey puts on during his show are original, but it seems as though the rest of the short is merely a retread of earlier efforts. 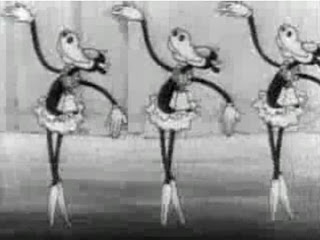 There are three acts in this short, each of which has some good gags. The first is a bit with a trio of Clarabelle Cow look alikes interacting with each other, posing as flowers and then revealing themselves when Minnie taps them with her magic wand. The sight of three Clarabelles dancing is a funny juxtaposition to the normal silly dances we’ve seen from earlier Silly Symphonies, almost mocking the earlier efforts.

The next act features two dogs doing a tap dance routine, which is quite entertaining. The dogs keep their droopy faces absolutely still while their bodies twist, turn and contort. It’s an amusing piece of work, although not necessarily original. 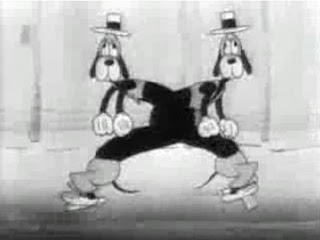 The final act is Mickey and Minnie performing with a multitude of instruments, which is a throwback to earlier efforts. The new twist here is that a family of cats that was living under the stage shows up to “help out,” and ends up playing along with the band. 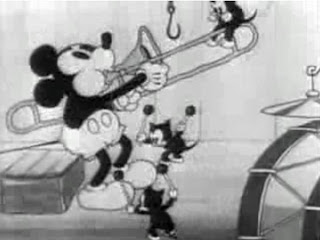 A new twist on the Mickey performance short, although now very familiar to Mickey viewers, is the “Pluto causes chaos” ending. As could be predicted, Pluto chases the cats, knocks down the set, and the curtain drops on Mickey, Minnie and Pluto. Again, very predictable if you’ve been watching the last few Mickey shorts. 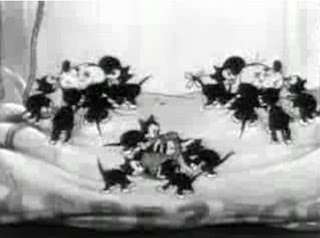 That’s the real problem with Mickey’s Revue, in case you couldn’t tell. It’s just the same as other things that Disney has already done with the character. Earlier shorts in 1932 and the latter half of 1931 took Mickey into new directions and were very fun. Even though this one is amusing, it’s a little too familiar and not notable, except for the addition of Goofy.