Walt and his crew are in fine form at this point in 1932, producing mainly Mickey Mouse shorts, and taking longer to put out the Technicolor Silly Symphonies. It’s not surprising, then, to see The Klondike Kid, one of the finest of the Mickey shorts, come out of this period.

The Klondike Kid is everything you want from a Mickey Mouse short – it features Mickey in a lead role, Pluto causing chaos, Minnie as a damsel in distress and Pete as the menacing villain. On top of all that, it’s extremely funny, well animated and features some classic gags. All together, that makes it one of the very best Mickeys. 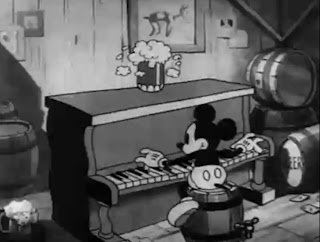 There’s so much to talk about here. Start with the kinetics of the Klondike Bar that Mickey is playing piano in when the short opens. We get a great wide shot of the bar featuring some great work by the animators of making each grouping of people distinct and funny. Take your time, and watch this shot over and over. There are gags everywhere, even though it’s just a wide shot.

Minnie’s appearance into the short is quite different than any other we’ve seen from her. She wanders up to the window to peer in, a quiet, lonely figure peering in at the fun and warmth inside. It’s a much more vulnerable side of Minnie than we have seen in other shorts. Mickey, being the big hearted mouse that he is, pulls her inside and tries to warm her up. 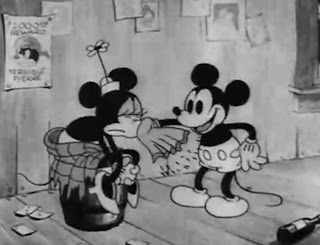 Their dialogue at this point is a high point of the short. Both claim that they’re nobodies who have no one in their lives. It’s clear we are meant to forget previous shorts, which is fine. But the instant bond formed between the two of them is very well done, and the dialogue is clear and well voiced, which has not always been the case.

Pete has to show up, of course, and shocks the entire bar as he does. Within moments, he gets into a firefight with everyone in the bar. This is another great piece of work, as the lights go out, and the only thing we see are flashes of light from the guns, illuminating Pete or his adversaries in turn. 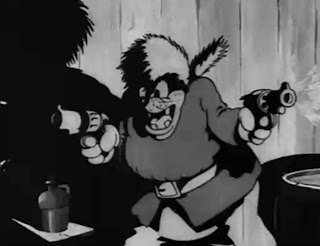 The rest of the short is fairly predictable, as Pete kidnaps Minnie and Mickey pursues, using Pluto as his sled dog. That part is pretty funny, since Pluto is easily distracted, and ends up chasing a rabbit instead. A rabbit? Yes, it’s a rabbit that looks remarkably like our old friend Oswald. 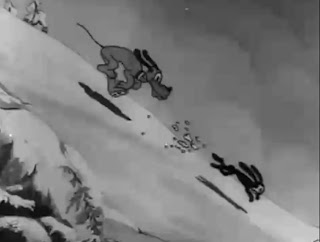 The finale is a big chaotic mess, but in a good way. Mickey crashes into Pete’s cabin, Pluto rolls into a giant snowball, the cabin tears loose and begins sliding down a hill, and finally everything crashes into a stack of logs and snow with Mickey, Pluto and Minnie on top. 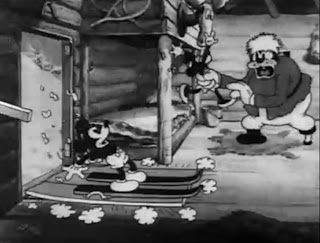 Klondike Kid is fun. It takes our familiar friend Mickey and casts him in the role of rescuer again, but provides more of the trademarks from his domestic shorts, like Pluto causing chaos. As such, it’s a great combination of the two types of shorts, and becomes one of the best Mickeys of all time.