The Whoopee Party may be an odd title for a short, but the contents give us an interesting and funny short that shows a little glimpse of the future. In many ways, this is a transitional short, with the integration of some of Mickey’s past and future all in one package.

As we’ve seen, Mickey started off his career with a couple of friends in addition to Minnie and Pluto – Clarabelle Cow and Horace Horsecollar. In this short, he adds Goofy to the mix. And, for the first time, Goofy mixes things up with Clarabelle, Horace and Minnie. Pluto’s absent in this one, but it’s all good, as Goofy shows his comedic chops. 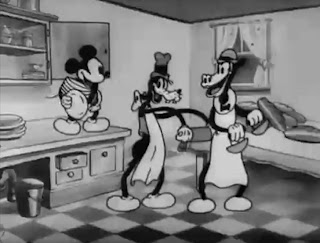 The subject of the short is really just one big party. Mickey and Minnie are the hosts, but a plethora of animals have joined the fun, with a huge dance floor full of eager dancers. Minnie provides the music at the piano for the majority of the short, while Mickey opens up with Horace and Goofy in the kitchen making food. Goofy gets the honor of unveiling the food to the masses, causing the predictable stampede to get snacks. 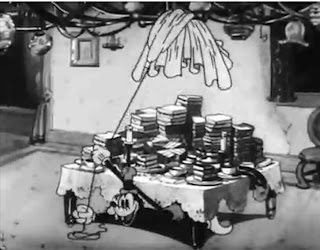 This is another Mickey short that has a rhythm and flow to it, with every action taking place to a steady beat. The music picks things up, as there’s really not a lot of story here, but having the characters swing along to the rhythm keeps things swinging. Even inanimate objects get into the act, such as a pair of lamps flipping on and off in time with the music. 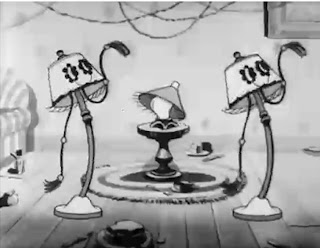 Ultimately, the cops show up to break up the party, but instead decide to join in the fun. The final scenes of the short feature Minnie and Mickey dancing up a storm surrounded by the policemen. It makes for a cute and emotionally satisfying ending. 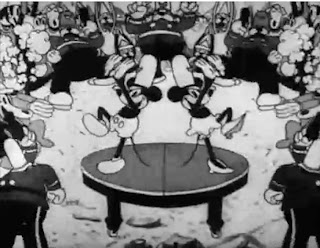 There are some issues with the short, however. For one thing, Minnie doesn’t have much of a role. She spends the majority of the cartoon seated at a piano, and with the exception of an animated stool giving her trouble, there’s not a great gag associated with her. In fact, most of the characters in this short get upstaged by Goofy.

In addition to his role in preparing the snacks and unveiling them, Goofy gets another great gag when he takes a party noisemaker and uses it to goose Clarabelle. The interaction between the two of them is very well done and very funny. It makes me smile thinking of how they would interact in The Three Musketeers, the direct to video film with Mickey, Donald and Goofy that came out a few years back. That film seemed like a throwback at the time, and it’s nice to see that there was a basis for the Goofy-Clarabelle relationship in that movie. 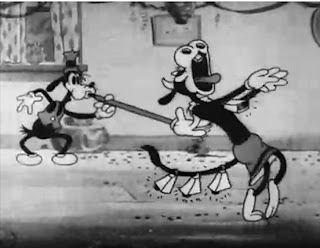 And of course, the story in this one is pretty weak. There’s no real conflict or struggle for Mickey to overcome, so you’re left with a short, fun but fluffy piece of work. And that’s just fine for one short, but it’s not sustainable for multiple shorts. That’s why you’ve seen more of the Mickeys feature fun stories with conflicts as we move on through the years.