Parade of the Award Nominees

A shorter review today, because today’s subject is all about the visuals. It’s an unreleased short, called The Parade of the Award Nominees, that was produced for the Oscars in 1932. Normally, this would not be a very significant short in the history of the company, but this one is. Why? Because it gives us our first glimpse of Mickey and the gang in Technicolor! 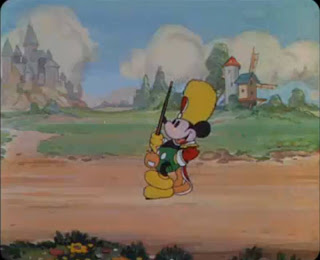 Yes, that’s our friend Mickey Mouse, leading a parade of the Oscar nominees across the screen. The animation is simple and there’s not a lot of characters other than Mickey and the gang, but seeing them in color is very interesting.

Note Mickey’s pants first of all. They’re green! I’m not a toy/merchandise collector, so I don’t know if that’s the case in the toys of this time, but seeing Mickey with green pants is quite a shock to those of us who have seen the familiar red, black and yellow color scheme for so long. Also note Mickey’s outfit, similar to what he would wear in The Band Concert, one of his most famous color shorts.

Next, we’ve got Minnie, carrying a banner announcing the presence of the nominees, but her color scheme is also interesting. We’re used to the pink and white polka dots now, but here we see a Minnie in a teal/light blue number. Very interesting. 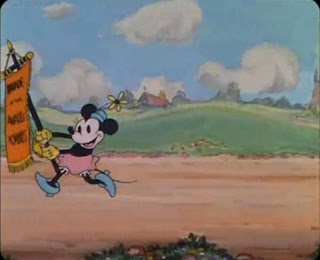 It’s also interesting to see Clarabelle used in this short. As we’ve seen, Goofy has been making more and more appearances in the shorts, but he’s not present here. Clarabelle makes her appearance as part of the parade, throwing flowers and the like. 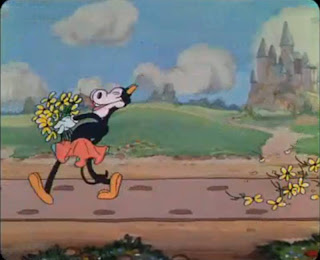 Pluto is the last of the Disney characters, bringing up the rear after the award nominees, with “The End” affixed to his tail. Cute gag. His coloring scheme is a little off as well, more of a muted brown/gray than the orange color we know today. 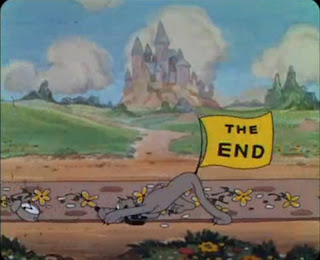 As far as the nominees themselves, I’m sure they would be good if I knew who they were. As someone who loves some old movies (watch Turner Classic Movies everyone!), I should know these, but I don’t. I believe this is Frederic March, from his role in Dr. Jekyll and Mr. Hyde, but other than that, I don’t know the others. 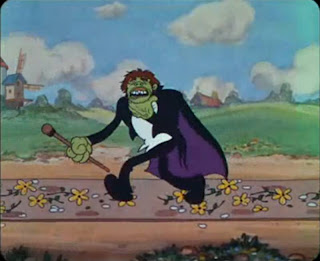 As I said, the fun in this one is watching our favorite Disney guys and gal in color for the first time. It’s interesting to see how these simple designs would later become etched in stone not only from the design but also their color scheme.