It would appear based on the shorts I have reviewed recently, that the Mickey Mouse team of Disney animators decided in 1931 to have their shorts become solely about fun and frivolity. They succeeded in the last half of 1931, and the first short of 1932, The Duck Hunt, delivers more of the same.

This one doesn’t feature the heartwarming scenes of Mickey’s Orphans, but it does feature the inspired chaos and classic fun. The title gives you the full story of the short, as Mickey and Pluto head out on a duck hunt, stopping to do a little dance to “Columbia.” But the difference is, the dance here feels organic, and there’s a good reason for it. 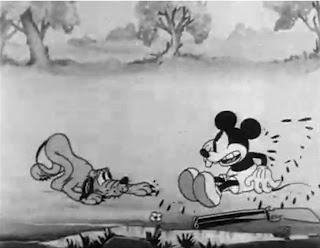 In past shorts, Mickey would simply pick up something from around him, either plant, animal or mineral and start banging away on something like a drum. This time, after Pluto gets in trouble for dousing Mickey with mud, he barks out commands to the dog. When Mickey sees the dog tapping its foot, he is struck with inspiration and starts playing his gun like a flute to spark the dance scene. It’s a subtle change, but a good one. 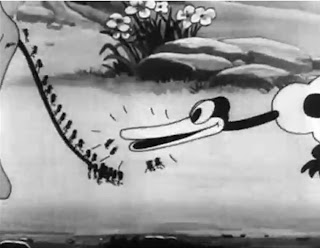 The rest of the short features the interplay between the ducks and their adversaries, Mickey and Pluto. One of the best tricks is when Pluto dons a wooden duck “hat” and wades into the water. He manages to fool some of the ducks until Mickey sneezes and blows reeds at them, and Pluto’s head pops up out of the duck. It’s quite funny, and the work on Pluto’s expressions during this sequence is inspired animation. 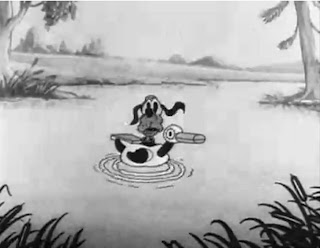 The final scenes feature Pluto and Mickey being grabbed by the ducks and flown through the air over rocks, barns and other landscaping. Again, nothing especially original about it, but it’s funny, and that’s what these Mickey shorts are supposed to be about. Another great gag is when Pluto’s fleas decide to parachute off of him while he’s falling out of the sky. When he and Mickey land in a pair of longjohns on a clothesline, the fleas parachute back in, causing Pluto to start scratching again. 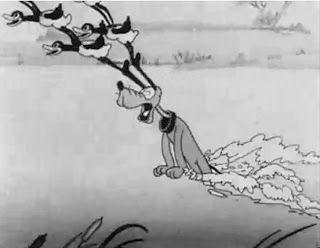 This short is much more predictable than some of the other Mickeys of the time, and that’s probably it’s biggest drawback. The gags are not as funny as they could be, because they are somewhat expected. However, that does not detract from the personality and character in the animation, which is stellar. The reaction shots from Mickey and Pluto are very well done. 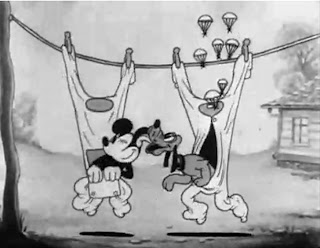 This short definitely passes the test of time. I watched it the other day with my kids, separate from my viewing for the review, and they laughed hysterically. Yes, today’s kids can laugh at a black and white cartoon from the 1930s. I think that says all we need to know about The Duck Hunt.