The Bears and The Bees 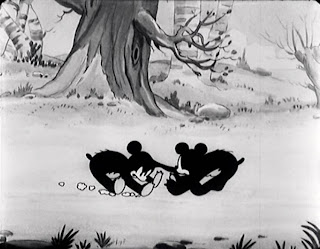 Yep, the return of Mickey bears! Okay, I’m just kidding, but we do get Mickey bears back in this one. First seen in Arctic Antics, the bear cubs that feature the same facial features as Mickey Mouse are recurring characters in the Silly Symphonies. This, however, is their first starring role. 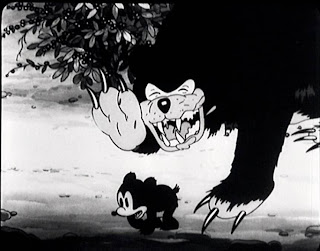 The bear cubs are just adorable. There’s no two ways about it. I’ll probably irritate animation historians here, but the design reminds me a lot of Stitch. Ok, wait, before you start throwing things, think it through. They have short, squat bodies, square arms and legs and rounded faces with prominent ears. Whatever you may think of Stitch, his design is fantastic, and the bears are a precursor of that design.

This short is a pastoral, peaceful short, at least up until the very end. It tells the story of the two bear cubs that wander away from their hibernating parent to find some food. Along the way, they encounter a more vicious bear, who is determined to hoard all the food itself. 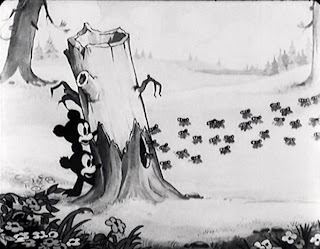 The bears stumble upon a field of bees, and of course, where there are bees, there is honey. Finding the honey, the cubs invade the tree and start lapping it up, only to get chased off by the bigger bear. The bees return to take down the invading cubs, but get the big bear instead.

The scenes of the bees attacking the bear give a little more action to the final part of the short, but they are very much in the tradition of other Silly Symphonies. Think of the flies in The Spider and the Fly or the birds in The Bird Store, and the bees are doing the same thing to this bear that happened to the spider and the cat in those shorts. 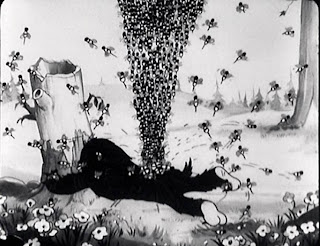 The final scene of the bear cubs eating the honey out of the stump of the bees’ tree is as cute as it comes. The animators went to great pains to make these bears a little more realistic, having them lick each other’s faces, walk like bears, fight playfully and other small touches. It seems as though these bears were used to give the animators a little more insight into drawing realistic animals, at least in their actions. 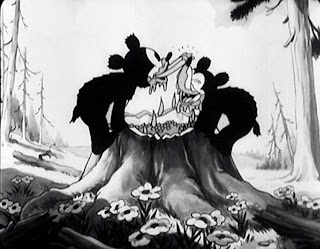 The Bears and the Bees is a fun, cute short, and I think that’s the best way to describe it. If this short came out today, it would be panned as a way to sell stuffed bears, as too “cutesy.” But that’s the point of this short in my mind – to make nature feel warm and welcoming, or “cute” if you want to use that term.