Color continues to play a role in the Silly Symphonies with King Neptune, the second in the series to be produced in Technicolor. The colors here are still not overwhelming, and they fit the short, but perhaps are not used as well as they were in Flowers and Trees. But the big thing that struck me from this short is how much it had to have influenced a later Disney animated production.

This seven minute short gives us much of the same story beats and scenes as The Little Mermaid, which would come over fifty years later. But the similarities are so obvious, that I have to think that Muskers and Clements used this short as inspiration for their classic feature. 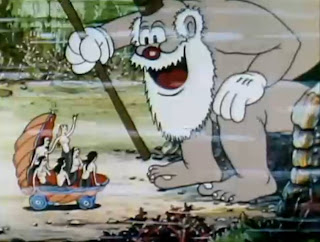 The undersea creatures forming a band, the clamshell opening to reveal mermaids, the large magical sea lord rising from the ocean to menace a lone ship, including stirring the sea with a trident – all of it can be seen in King Neptune as well as in The Little Mermaid. The similarities are stunning to someone who has seen both films.

That said, King Neptune is quite an entertaining film, and it’s a definite tonal shift from some of the earlier Silly Symphonies. In fact there is very little “silly” about this short, with most of it being composed of a battle between the sea creatures and a band of pirates. 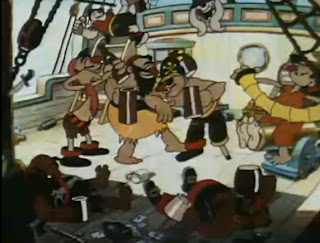 Once the pirates sail into Neptune’s waters, they try to kidnap the mermaids, and the sea animals take arms to defend their sisters. Octopus stand on two legs and use the others to attack, birds lift lobsters up like bombs, and a whale blasts swordfish out of his mouth as a way to cut the sails of the pirate ship. We even have a whale serving as an ersatz aircraft carrier. It’s a great sequence, but it’s very serious. There is less of the light hearted fun of earlier Silly Symphonies when animals ganged up on an adversary, and more of the life and death you’d expect from a battle. 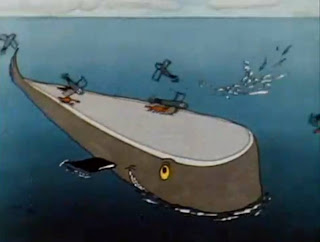 It’s Neptune, of course, who decides the battle. He lifts up from the sea and impales the ship, then drives it down to the depths. Here, he looks much like Ursula from The Little Mermaid as she menaces Prince Eric’s ship. The evil intent in his eyes as he erupts from the sea and attacks again contributes to a more serious tone. 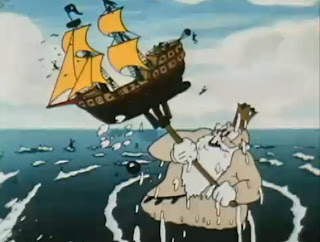 If I have complaints about King Neptune, it’s in the character designs and the color. The designs are overly simplistic for such a sophisticated storyline. The mermaids are amorphous from the waist up, with mere dark circles for eyes and a mouth. They come off as dead and expressionless. Similarly, the pirates and King Neptune have red bulbous noses that make them look very silly and insignificant for such a serious battle. 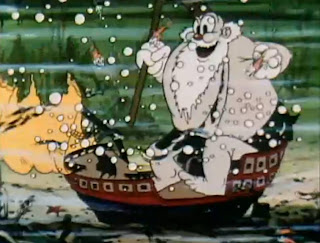 The color in this one gets very muted in the under the sea sequences. The rushing white that implies the waves overshadows a lot of the color, but there is less color in this than in Flowers and Trees. It really seems that the animator designs have not caught up to the fact that they can use color now, and they don’t allow for that. All in all, though, I view King Neptune as a nice experiment in a more serious short that succeeds fairly well.