Let me say first that Mickey in Arabia is a rollicking good time. The “fun” that I talked about with the early Mickeys in 1932 and the latter half of 1931 is here in spades. It features a very expressive Mickey engaged in a lot of gags in and around an Arabian (looks Egyptian/North Africa) country. But this short has a couple of drawbacks that give me pause. 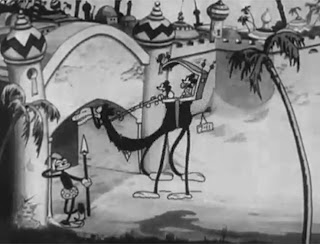 The first is the caricature of the Arabian natives. I would assume that in 1932, we in the United States weren’t exactly worried about the feelings of those in the Middle East. So, I can’t blame the people animating the short for making crude caricatures of Arabs. But, as a viewer in today’s world, seeing those caricatures drew me out of the short’s story, and made me uneasy. 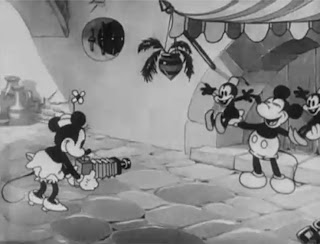 Again, at the time, I’m sure it meant nothing. And I don’t pretend to say that there is any malice or ill intent behind it by the animators. It’s just something that sticks out like a sore thumb when watching this short today.

The other issue with the short is that it is essentially a remake of Gallopin’ Gaucho. Rather than encountering Minnie in the cantina, she comes with Mickey to see the sights, but from that point forward, the story is the same. Minnie is kidnapped by Pete, Mickey’s camel gets drunk and makes it hard to follow Pete, Mickey rescues Minnie from Pete’s lair, and rides off into the sunset with her. 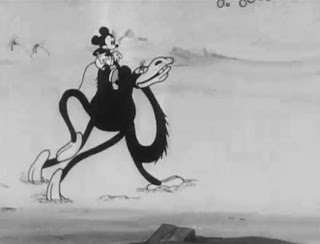 Those two things aside, I loved the short. It features all the things you would want from a Mickey Mouse cartoon – great gags, Mickey as the hero, and lots of action. The scenes in Pete’s castle/lair are great, with the soldiers fleeing Pete’s errant gunshots and diving into pots, as well as Pete throwing swords after Mickey. 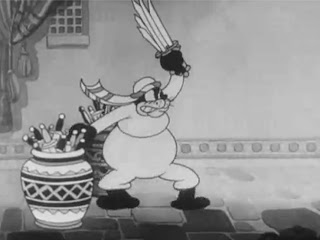 The gags are on overdrive here. A favorite is early on when Minnie tries to take a picture of a juggler, and he pauses, all the balls holding perfectly still in the air while she snaps her photo. But there are so many more. Even the ending scene of Mickey and Minnie seesawing on the camel’s hump as they ride away is particularly funny. 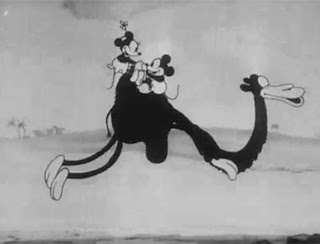 At this point in the Mickey series, the main mouse is really coming into his own. Mickey is very much the leading man in this short, a throwback to his earlier days. Eventually, other characters like Pluto, Donald or Goofy would overtake him, but Mickey in Arabia features Mickey at the top of his game.