There are certain milestones in Disney animation that everyone points to – Steamboat Willie (the first Mickey cartoon released), The Skeleton Dance (the first Silly Symphony) – and we have reached another one today with Flowers and Trees. The milestone here is the very first use of Technicolor’s three color process in animation, bringing us the first Disney short in full color.

As such, this short has to be evaluated a little differently. Did the animators use the addition of color to their benefit? Is the short different because of the color? Does the color enhance the storytelling? I think I can safely say the answer is “yes” to all three questions. 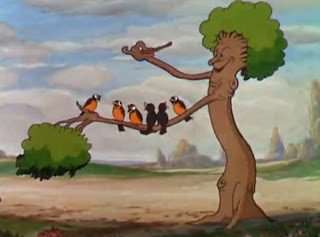 Flowers and Trees is simply charming. There’s not a better way I can think of to describe it. It harkens back to the earlier “season” shorts like Spring or Summer in that it is really a pastoral cartoon. Obviously, featuring flowers and trees in bloom would lead to that, but there’s more than that here. There is a sense of peace, tranquility and happiness that permeates the opening scenes. 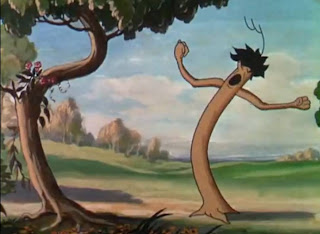 The storytelling here is superb. The short really is a sort of throwback, in that it’s more of an interpretation of a piece of music, but it does feature a continuous story from beginning to end. Two trees have fallen in love as spring erupts all over, only to be menaced by a dark, horrible tree that wants to steal the female. 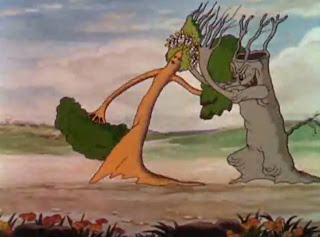 After the inevitable denial, the evil tree goes for the gusto by setting the forest on fire! It’s here where the colors really pop off the screen, as the “firelings” attack the various forest creatures. Before this the color was limited with various browns and greens, but the hot orange flames really stand out, and you feel the menace as they run around attacking the landscape. 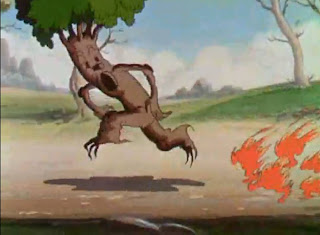 Ultimately, when the fire clears, the evil tree is dead, and the good trees join together in a mock “wedding” complete with a ring made of a caterpillar. The final scene even features a rainbow, which is a stunning piece that would not have been possible to show in black and white. The other question to answer is why use color on the Silly Symphonies? Surely, investing in color for Mickey Mouse, the studio’s most popular character, would make more sense, right? In truth, no, it wouldn’t. Walt looked at all the angles, and despite the myth making, he was a shrewd businessman. The Silly Symphonies were lagging in popularity behind Mickey, so Walt put color into the mix to boost lagging sales. And it worked. From this point forward, the Silly Symphonies would grow in popularity, although they would never reach the heights of Mickey Mouse.