Back to work here after a great weekend, and with a real treat – a Silly Symphony featuring one of the Fab Five! As far as I know, only one other Silly Symphony (Wise Little Hen) features any of the gang, and even that one is a very early version of Donald. Here, we get a fully formed Pluto in a great short, called Just Dogs.

Just Dogs is in the vein of the more recent Silly Symphonies, in that it is focused not on an interpretation of a certain piece or pieces of music, but instead tells a full story from beginning to end, with consistent main characters. In this case, the main characters are Pluto and another little boxer looking dog that shares a cage with him. 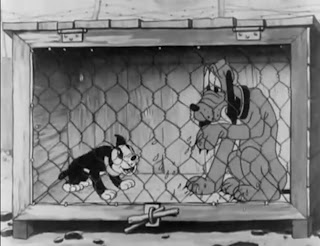 The basics are that the little dog finds a way out, then frees Pluto and the other dogs to leave the pound. Again, we have an instance of Disney maligning dog catchers and their work. Although there is not a dog catcher in the short, we are clearly meant to cheer for the dogs as they leave. The opening scenes are very reminiscent of The Bird Store, with various shots of dogs looking pathetic in their cages. I’ve looked through all my books on Walt, and can’t find any incident in his youth with a dog catcher or the pound, but there has to be a reason why this theme keeps coming up. 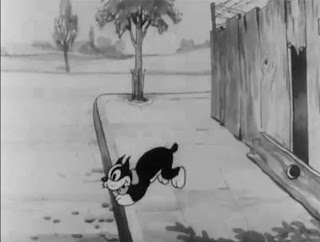 Pluto comes off here as quite rude and mean to the little dog who freed him. He is dismissive of the dog in the cage, ignores him once he’s free, and literally runs into him after they leave the pound. 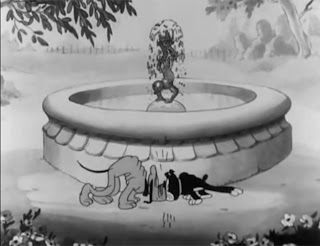 This is the Pluto we’ll see later in his own starring shorts. The Pluto who chases cats, is inconsiderate of Mickey, etc. is the one who would become a star. Here, his harshness comes off a little sharp. When the smaller dog pulls up a bone and takes it to Pluto, trying to curry favor, our favorite mutt kicks his companion away and eats on the bone by himself.

The madcap fun of this short comes when the other dogs get wind of what is going on, and start chasing Pluto and his little friend to get the bone. This is where we get the majority of the gags, including a dachshund stuck in a pipe and Pluto sticking his head out of a discarded toilet seat. This was the animators’ opportunity to create more fun, and they took advantage of it. 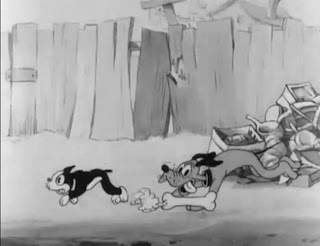 The solution hit upon by the smaller dog is ingenious. He climbs a flea bitten dog and scratches the fleas off, then leads them to an attack on the pursuers. Once the other dogs start scratching, they drop the bone and the little hero picks it up. This time, though, when he brings it back to Pluto, the bigger dog decides to share. 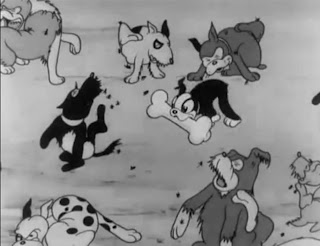 Again, Just Dogs is fun. It does not feature much that will really catch the eye, but that’s alright. It’s a case of very solid storytelling with a happy ending, that screams “Disney.”