Somewhere, somehow, the Silly Symphonies evolved from a “daring” set of shorts to something designed to get out new characters and tell cute little vignettes. There’s nothing wrong with that, but it’s a different twist to the series. Little Hiawatha is a cute vignette, but a particularly good one.

I had seen bits and pieces of this before, and heard much about it, but never actually sat down and watched the entire thing. I’m so glad that I did, because I feel as though I had been missing something, and now I understand what it was. Little Hiawatha is delightful, and it foretells later developments in the Disney films. 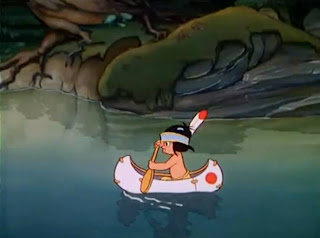 For those of you unfamiliar with the story of Hiawatha, it’s fairly straightforward. The little Indian brave stalks through the forest, with his bow and arrow ready to strike an animal. However, when confronted with a rabbit, he decides he can’t do it, and allows the rabbit to get away. 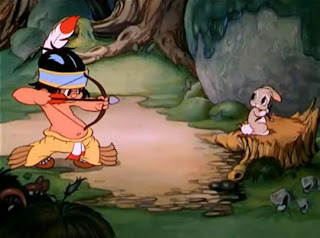 Instead, Hiawatha turns his attention to some nearby tracks, and ends up face to face with a bear. As he is chased back through the woods, the other animals decide to help him, because of the kindness he showed to the rabbit. The animals lead the bear away and get Hiawatha away safe and sound. 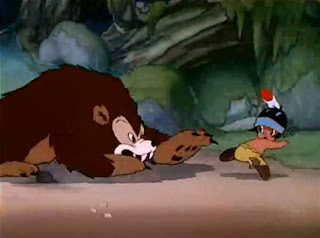 If it sounds simple, it is, but it’s also heartwarming. The “cute” designs for characters we have seen in Silly Symphonies like Funny Little Bunnies are taken to full effect here, as all the characters have a rounded, homey feel. Even Hiawatha is a bulbous character, and that’s shown to full effect, as his pants fall down often, exposing his round bottom. 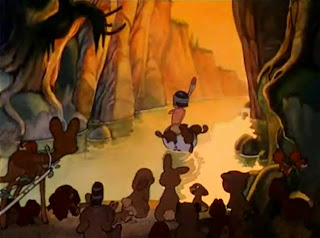 Where in some of those earlier shorts the cuteness of the designs was a little over the top, here it works very well. If Hiawatha was menacing angular, harsh looking animals, you wouldn’t want him to let them go. And if he was a normal looking person, you would not feel sympathy for him. Here, it is a two way street, and that makes it work. 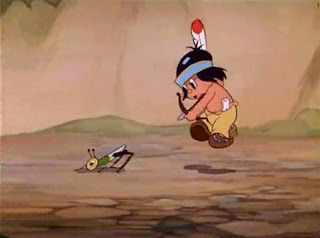 Where I think this short really shows us something is how it is a glimpse to the future. The narrated opening and ending are things we will see again in future shorts, and the middle part of the short, with the simple music, lack of dialogue and pastoral nature reminded me of Bambi. It makes Little Hiawatha seem a little like the canary in the coal mine, showing us a glimpse of the next phase of Disney shorts.