Of all the Fab Five, I have often said here that Pluto offers the animators the most opportunity to express themselves. As a “real” animal, Pluto gives the Disney team the chance to express human emotions within the limits of animal behavior. All that said, it may seem counter intuitive that I do not care for the Pluto cartoons as much as the other series.

It probably has most to do with the fact that I don’t relate to Pluto as a character the way that I do Donald or Goofy. Pluto’s roles change often, such as the father role he plays in Pluto’s Quin-puplets opposed to the roles he played in the Mickey shorts. Plus, he tends to repeat gags a great deal. 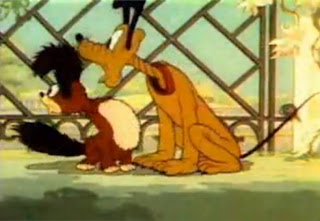 Take for instance the first part of this short. Fifi, who is now Mrs. Pluto, heads off to get some food for the family, while Pluto is left to mind the children. So he ends up trying to herd the five pups in very much the same way he did the chicks in Mother Pluto. In fact, this short is similar to Mother Pluto in that it puts Pluto in the parent role, only to see him fail spectacularly. 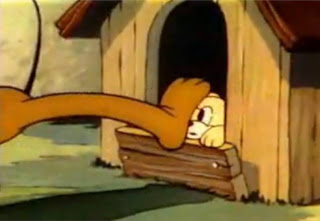 There are good gags in this short, though. When the children disappear into the basement of the nearby house, they slip and slide on some potatoes. Then, one of the pups pulls free an air hose from a nearby compressor, and the hose begins whipping around the room. This is what drives the rest of the short. 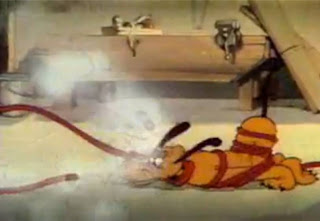 The air hose ends up knocking Pluto out, assisting nearby paint cans in spray painting the children, and generally wrecking the basement. Having the pups get sprayed different colors with different patterns because of junk in the basement is a very clever gag. 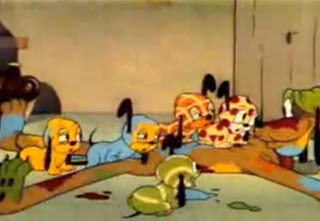 What I didn’t like was the way Pluto got knocked around and ended up with a jug of moonshine pouring down his throat. This is a similar gag that was used in Alpine Climbers, when the St. Bernard poured the alcohol into Pluto to revive him. It just seemed unnecessary. Pluto was already in hot water because of the way the kids were getting in trouble. It seems like it would have been better to have him chasing the kids around but unable to prevent them from getting sprayed. 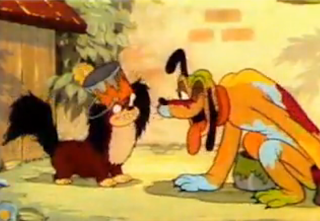 The ending is a little off, too. Fifi returns, but she sees the kids coming up from the basement and growls at them. It’s unclear if she’s just mad or if she doesn’t recognize them. Then, she really takes it out on Pluto. The short closes with Fifi in the doghouse growling, while Pluto and the children sleep in a nearby barrel. It seems just off to me. Is Fifi still mad while they’re fine with it? What is going on?

I thought Pluto’s Quin-puplets was good, but falls short of the standard set in the other shorts from 1937. Watching it the day after The Old Mill was probably part of the problem. You could not see two different shorts if you tried.