This is one of the Mickey shorts I have seen over and over again, even before I started the Disney Film Project. It’s a favorite of my kids, my wife and myself, so I admit to a little bias from the get go here. That said, The Worm Turns is a fantastic piece of work, and it carries little clues about where things have been and where they are going in the Disney films.

Mickey is shown here in a very different light than we have seen before, acting as a mad scientist of sorts, mixing up a formula for courage. What I find interesting is that this setting is very similar to what we will later see as the Evil Queen’s lair in Snow White. There’s the percolating chemicals, jars of things on the shelves, and even a leather bound book propped up on a skull. 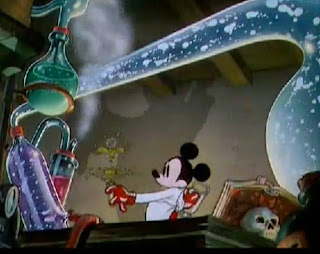 The story then proceeds much like one of the old Silly Symphony “season” shorts would, progressing from one animal to the next. It begins with a fly, who gets terrorized by a spider. Mickey sprays the fly with his potion, and suddenly, things change – the fly starts wailing on the spider. 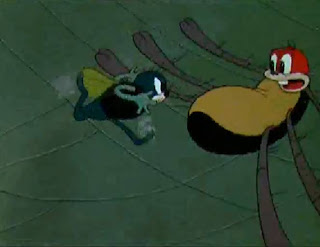 The action goes from that point, as Mickey realizes that it works. In rapid succession, he turns a mouse on a cat in the house, then the cat on Pluto outside, and finally, Pluto on Pete the dogcatcher. Once again, one of Walt’s shorts features a dogcatcher getting abused! You’ll recall that dogcatchers have been the butt of violence in Disney shorts going all the way back to Alice and the Dogcatcher. 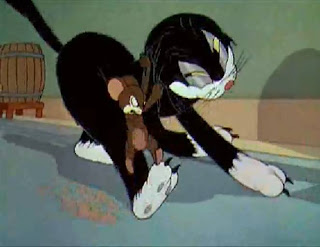 What I love about this is that it takes the same gag, but applies it differently throughout the short. The things that the fly does to the spider are quite different than how the cat attacks Pluto. And Pluto attacking Pete is just a classic moment. After Pete has terrorized Mickey and friends for so long, it’s nice to see them get some revenge. 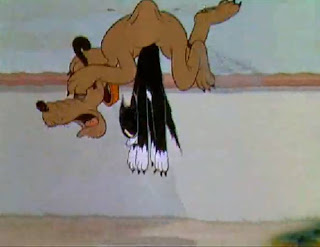 The throwback to the format of the old Silly Symphonies is something new in this for me, though, as I had never seen those shorts prior to last year. Seeing the evolution of that progression tactic from the seasonal shorts to here was a revelation. On the opposite end of the spectrum, it’s now clear looking at this short that Mickey is merely a bystander in his own series. 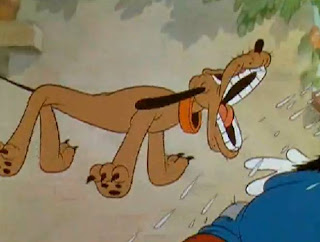 Mickey’s appearance in this short is merely as the facilitator of the intervening scenes with the various animals. Sure, it’s a trend that has been going on for some time now, but it’s glaring to me when I watch this short that I have seen so many times before. It’s also interesting to see Mickey’s new neighborhood. Rather than the barnyard setting, he’s now in a Spanish looking neighborhood of the type you would expect in Southern California. Mickey has now mirrored Walt and his team’s rise in the world.

This is the kind of short I enjoy the most, with Mickey and his pals showing their comedic chops. It’s funny, charming and most of all, fun. The Worm Turns is definitely one of my favorites.