Remember a few reviews back, when I said how the Silly Symphonies had rebounded with The Country Cousin? Yeah, strike that. It was temporary, because I had a hard time watching More Kittens and getting through it.

Before I get to what I didn’t like, let me say that the short is very pretty. The backgrounds are lush, the characters are well drawn, and it plays out well. It’s a short that is very bright, colorful and visually appealing. That is about all I liked about it, though. 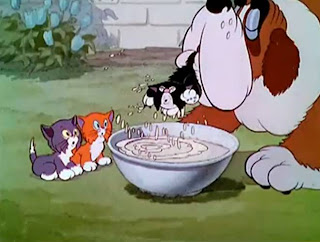 Why? Well, for the first part, it’s not like Three Orphan Kittens, this short’s predecessor, was anything great. The three kittens in that short return here, but I’m not sure why. There is nothing that really distinguishes one kitten from another other than their coloring. They are not compelling characters, because they don’t do anything really different from one another. 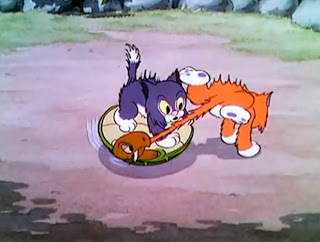 The idea of this one is that the kittens are chased out of the house and into the yard, where they have to hide from the “Mammy” character. Perhaps part of what colors my thoughts on this short is that I find the Mammy stereotype so offensive, although I understand why it’s in the short. 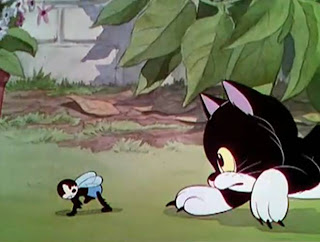 Regardless, the kittens take up with a St. Bernard in the yard, who lazily becomes their friend and protector. At least, that is what I suppose is the point. In reality, the kittens become embroiled with a fly, a turtle and a bird, all without the dog really doing much for them.

There is a little interference from the St. Bernard, but the constant gag is that the kittens or the animals they are fighting hide or get lost in the folds of the dog’s mouth. The best gag of the entire short comes when the kittens are chasing a little blue bird, and the blue bird whistles “Who’s Afraid of the Big Bad Wolf?” from inside the dog’s mouth, then keeps getting pushed out by the dog’s tongue like a cuckoo clock. 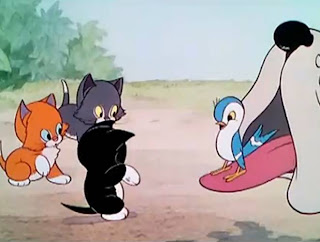 The majority of the short is just a cutesy take on the kittens’ interaction with these various animals, but there’s no driving force to the narrative. Nothing really keeps things going, and so it was very tough for me to watch and remain interested. I found my attention slipping. 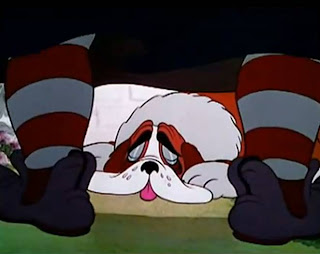 The ending features the Mammy character chasing the cats again, only for them to hide in the fur of the St. Bernard. He doesn’t give them up, and the short ends. Yes, that’s all there is to it.

I can see why this short could have been popular. It’s pure fluff, a pastoral tale and escape from the horrors of the Great Depression. But it doesn’t hold up, especially to audiences today who have seen the more sophisticated work that Disney did during this same period.