There is no way that this short should be classified as a Silly Symphony. Let’s make that clear from the beginning. This is the first of many Pluto shorts, and should be classified as such. I don’t know if Walt had to deliver a certain number of Silly Symphonies or what, but this is a straight up Pluto short, and don’t let the title card or anyone tell you differently.

With that out of the way, I can say that Mother Pluto is a good, not great example of a Pluto short. There is no dialogue or interaction with other humanized characters, simply Pluto, chicks, a hen and a rooster. This is a cute animal short, but it is done well enough that it doesn’t come off as trite or too cutesy. 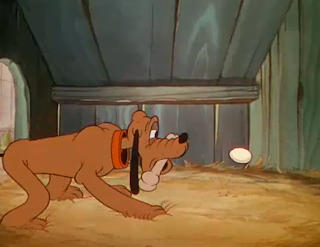 The premise is that a hen lays her eggs in Pluto’s dog house, then heads out to do something. Pluto returns to the doghouse to find the eggs hatching all around him. Since Pluto is the first sight that the chicks see, they presume that he is their mother, much to Pluto’s dismay. At least initially. 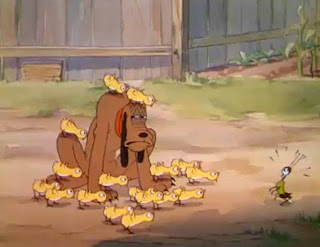 The nice twist here is that Pluto warms up to the little chicks, and starts taking care of them, first in an encounter with a cricket, then with a caterpillar. It’s a novel idea, and a different side of Pluto. He’s usually the trouble maker, but here, Pluto is the hero, trying to keep trouble from happening. 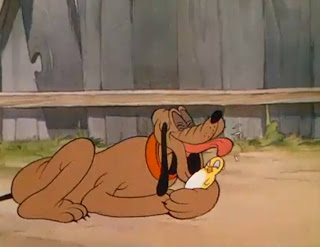 Of course, when the hen discovers what has happened to her chicks, things take a turn for the worse. The hen runs to her husband, the rooster, who decides to give Pluto a piece of his mind. What really cracked me up was seeing the rooster do the typical bravado that we’ve seen in so many other shorts. You know the motion – hiking up the belly that then plunges onto the ground, then shoving his hair/plumage forward. Don’t know why, but seeing the rooster do it struck me as extremely funny. 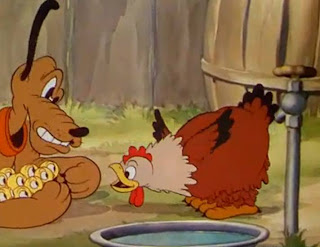 What was also funny was seeing Pluto and the rooster go back and forth. Having the two of them mirror each other is a stroke of genius, because it makes the obvious mismatch seem plausible, as well as adding humor. Pluto acting like a chicken is hilarious, but seeing the rooster jump around and try to go nose to nose with Pluto is just as fun. 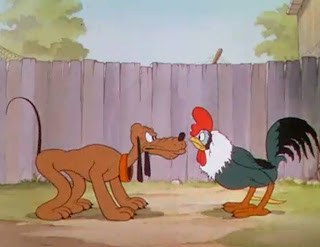 The ending is unexpected as well, because rather than the chicks returning to their “real” parents, they end up coming back to Pluto. The short fades to black with the chicks cuddled up to Pluto in his doghouse.

This is a short with a lot of heart, but not a ton of great gags. It’s part of a movement away from the gag based humor of earlier shorts and towards storytelling. Mother Pluto is not the best example of this, because some of the Mickey shorts and some others do a better job of mixing the two, but it’s a good Pluto short nonetheless. Just not a Silly Symphony.