This era of Disney shorts is truly my favorite, and Clock Cleaners is no exception to that. I have written here before about how much I love the trio features, where Mickey, Donald and Goofy work together at some menial job. The combination of the three with gags and other fun stuff is irresistible. 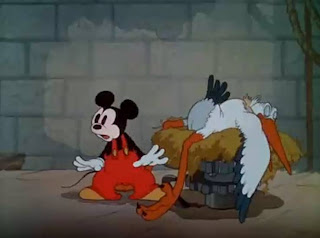 Clock Cleaners is a flat out fun short, mostly because it relies on that formula of mixing the three leads with unique situations suited to their temperament. It really seems like this era is when the animators began developing distinct personalities for all the characters. That’s the biggest development I have not discussed much so far – that Mickey and Goofy and Donald are all different characters, versus the past, when they all existed to conduct the latest dance or mile a minute gag.

For example, Goofy’s whole modus operandi is to be, well, the Goof. He’s easily surprised, somewhat unobservant, and generally good natured but not bright. That carries through here, where he’s cleaning the bell of the clock, but keeps getting knocked around by the bell ringing statues. 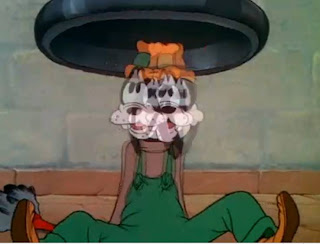 From there he stumbles around the top of the clock tower, eventually falling down, walking in a daze across a rope, falling only to jump back up off a flagpole and knock Mickey back inside. It’s the most hilarious sequence Goofy has been involved in so far, and again, foreshadows how he will be used in the future. 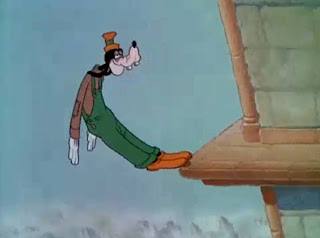 Donald is the other big star of this short, as you would expect. Mickey is not a full-fledged solo star anymore, sadly. Donald, though, is on the upswing, and this short features one of my favorite Donald gags. Donald tries to clean a spring, but ends up unraveling the coils. When he tries to hammer them back into place, the springs keep popping up, leading Donald to play a game of “Whac-A-Mole” with the spring. 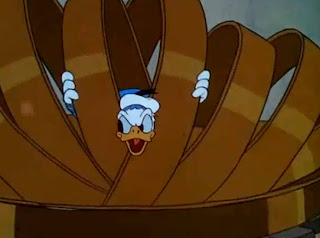 But that’s not the best part (although I do love Whac-A-Mole). No, when Donald gets too irritated with the spring, the spring “talks” back. The vibrations of the spring seem to form words, which makes for a fantastic gag. Then, when Donald throws his hammer at the spring, it catches the hammer and throws it back, landing Donald in the gears of the clock.

It’s a fantastic gag, that is repeated at the end of the short, this time with all three members of the gang. Donald’s frustration plays perfect against the spring, which can be interpreted as either an imagined slight or possibly a real inanimate object coming to life. The great thing is that it can be read either way. And the shot of the gang in the gears of the clock, then unable to stop shaking after they drop off is priceless. 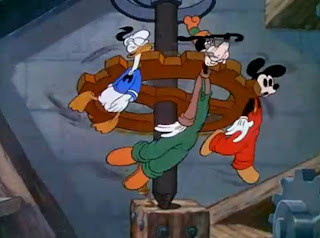 This short is a favorite among my family, simply for the last scene of the three shaking around. Mickey does have a little bit of fun with a stork perched in the clock, but for the most part, it is a fun time with Donald and Goofy. It’s an enjoyable short that makes me smile every time I see it.