The 1937 goodness continues today with another trio short, and another classic – Moose Hunters. What’s it about? Well, Mickey, Goofy and Donald go hunting moose. What did you think it was about?

But to say that’s all, is not treating this short properly. It has some great gags and fantastic usage of the side characters. Goofy, Donald and Mickey do not get to shine as much as they do in other trio shorts, but they are portrayed “realistically” here, even though they are doing absurd things. 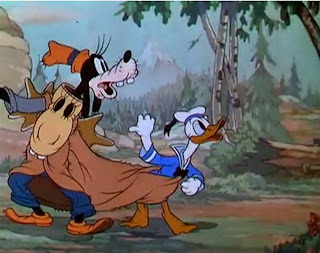 Someone (Joss Whedon, maybe?) once said that it is okay to have characters doing absurd and unrealistic things if you have the rules of those things established and the characters stick to those rules. That’s what is emerging to me in Moose Hunters and the Disney oeuvre that was not present in earlier shorts. 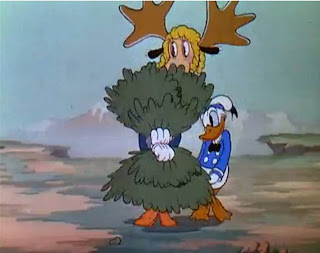 In Moose Hunters, we have the three hunting moose, with Goofy and Donald dressed up in a moose costume, while Mickey pretends to be a tree/bush, with foliage around him as he walks forward on stilts. Again, it’s ridiculous, but the way things follow in the short, they are consistent. 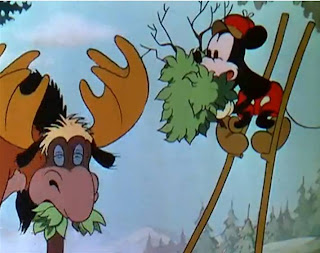 Goofy and Donald strike off to woo a moose with their female moose costume, while Mickey gets tangled up with another moose. When his shotgun breaks, you expect that he will be exposed. He is, eventually, and there’s no means of escape. This is where you see the divergence in Mickey’s character from the 20s and early 30s. The old Mickey would have conjured up a way to walk across musical notes or swing from his word balloon.

That’s not the way things work anymore. Partially, that is sad, because the whimsy and spontaneous nature of the early shorts was a good thing. But as the Disney studio moves into storytelling with the features, you can see that reflected in the shorts as well. Similarly, Goofy and Donald’s interaction with the moose is done well, with good gags that fall within the realm of believability. I particularly loved when the moose costume flies off and they are forced to do the old fashioned fan dance while wearing the moose head. It’s a fun nod to burlesque in a family friendly short.

The ending of the short features the two moose coming together to fight over the Goofy/Donald moose, then finding out that they have been had. Seeing them fight and shake the scenery is a great piece of animation. You don’t expect backgrounds to move, but they do here, and it’s very good. 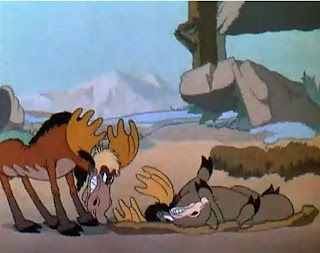 Seeing Mickey, Donald and Goofy fleeing like crazy is amusing as well, especially watching them paddle like crazy away from the moose. It seems that these three never get what they’re after when they work together. Moose Hunters brings them together again and to hilarious results, and it’s another favorite of mine.