We’ve seen a lot of recycling in the Mickey shorts. That’s to be expected, because Disney was under contract to release a certain number of shorts every year, and many of those had to be Mickey shorts. So, it’s not surprising that allowing the animators to return to familiar settings or gags would speed up that process. 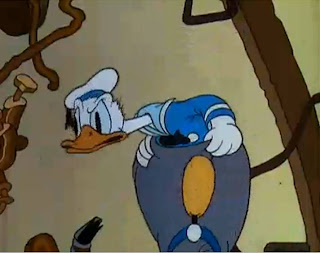 Mickey’s Amateurs, however, is seemingly a high point of retreads, although it turns out pretty well. Again, we have Mickey hosting a show on stage in a theatre, a setting we have seen multiple times before. Mickey’s show consists of Donald trying to recite a poem and failing, which has been seen a couple times before. And we have Clara Cluck singing, which we have also seen previously.

That said, it all works out pretty well. This isn’t the most innovative or original short, but it’s a fun time with some familiar characters. Mickey in this short is the most like Walt I can imagine. As he keeps saying, “Okay, okay,” to calm down the crowd or the performers, he seems so much like Walt on the old Disneyland TV show. Donald tries to steal the show here, but he’s not featured as much as in other shorts like this. It’s amusing to see him first try to butter Mickey up with a gift of an apple, only to take it back when his recitation of “Twinkle, Twinkle Little Star” fails. His second attempt, when he comes to the stage dressed in a disguise and ends with an out of control machine gun firing all over the stage, is no less memorable. 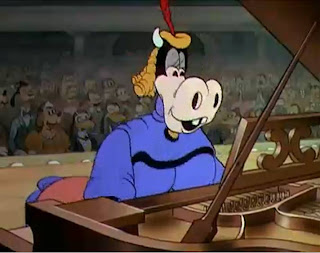 The midsection, with Clara Cluck singing while Clarabelle Cow plays piano, is less entertaining. Clara is not a terrible character, but she’s not as well drawn as the Fab Five. It’s funny to see her frustrated and chasing the microphone, but in the end, not as endearing as Goofy or Donald. 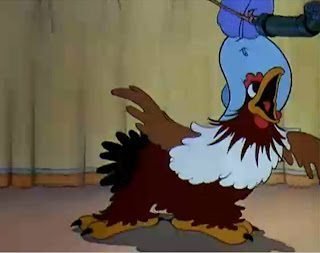 Goofy being my favorite character, his sequence in this short is my favorite. Dressed as a bandleader, he comes out with a one man band contraption that obviously goes wrong. Watching him try to keep up with the craziness is what I love about Goofy. It’s a good peek forward into his own solo series. 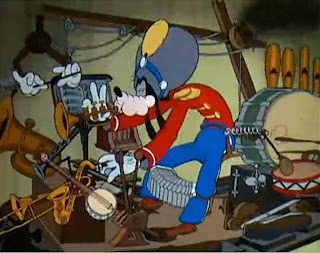 I’ve seen some poor reviews of Mickey’s Amateurs and I can understand that. It’s not original, as I said, and it doesn’t feature a sequence that is particularly memorable. The most “original” part of the short is at the end, when Donald tries to push his way through the iris as it closes to black. He fails, of course, but it’s the first time we’ve seen Disney push the fourth wall like that.

However, I would have to say that Mickey’s Amateurs is a fun time, just not a fantastic short. When you compare it to others in 1936-37, it doesn’t measure up, but that’s a very high standard.