We’re back to the Silly Symphonies with Woodland Café, and I can’t say that it’s a welcome return. When I looked at my list of shorts, this was not one I was familiar with, and frankly, was not looking forward to watching it. I watched it through, and didn’t get it. So, I started doing some research.

With a little more digging, Woodland Café made more sense to me. But, that means that as a whole, it doesn’t hold up nearly as well as the Mickey shorts of earlier in 1937, or even some of the other Silly Symphonies. 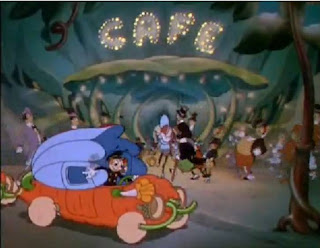 What did I have to go digging for? Well, to be honest, the whole thing didn’t make much sense. The short opens with a group of bugs heading into a bug nightclub, and they spend the entire short dancing and enjoying the music of the band. And that’s it. It would be fine if there were some great gags or standout sequences, but there’s nothing that big about it. 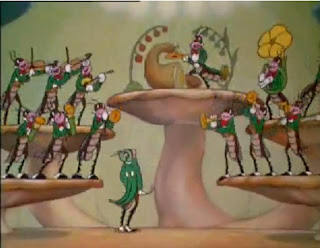 It seemed odd. So I started searching for more info on the short, and things fell into place. During the time this short was released, a popular form of film was a feature showing white stars traveling to Harlem to see the “new” music coming from stars like Cab Galloway and others. This short is a take off of that. 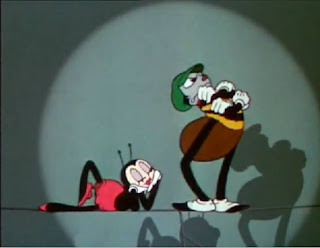 As I said, it doesn’t hold up for that reason. The effort that it took me to figure it out made it difficult for me to enjoy the short, even after a second viewing. However, there are some things that were interesting. 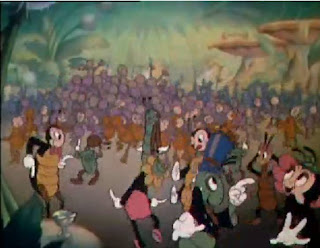 The whole club scene set up is reminiscent of something you would see in a Tex Avery or Warner Bros short. And that’s not the only thing that seems non-Disney. Towards the end of the short, the sequence where the band is playing reminded me a great deal of Chuck Jones’ Dr. Seuss work. We see various weird shaped instruments playing against rapidly changing color backgrounds. This reminded me right away of things like How the Grinch Stole Christmas, when the Whos are playing their instruments at the beginning of the film. 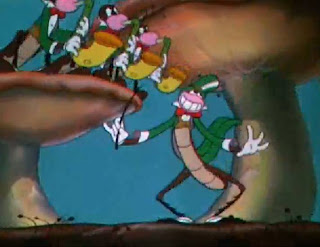 The whole short has a sort of Chuck Jones/Warner vibe to it. There’s no through line or story like we had in some of the earlier 1937 Disney shorts, and there’s no standout character. Instead, it’s a series of dancing, bands and some gags, wrapped up in a seven and a half minute package.

Woodland Café isn’t a bad short. The animation work is good, the backgrounds are nice and the music is very good. But it doesn’t have anything particularly memorable or fun that makes it measure up to the rest of the Disney films in this era.