1937 is shaping up to be a fantastic year for Disney animation, if the first few shorts are any indication. First we had The Worm Turns, one of my personal favorites, then there was Don Donald, the first solo Donald short. Now, we get Magician Mickey, another favorite of mine and a great example of Mickey reverting back to his former, mischievous self.

Mickey in this short plays as the foil to Donald, which is not a role we’ve seen before, except in another classic – The Band Concert. The difference between that classic and this one is that Mickey is on the offensive. Magician Mickey shows Mickey at his most confrontational, something that has been missing from his shorts for over a year. 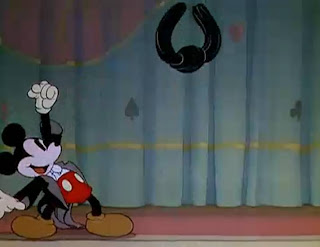 As expected, the short is about Mickey coming on stage to perform a magic act. It’s another in a series of shorts that shows Mickey performing in an opera house/stage setting. Walt’s love of vaudeville and live theatre comes across when you see the shorts, because his characters are so often putting on a show. It’s not the most imaginative use of the medium, but it works well because of the gags the animators pull off. 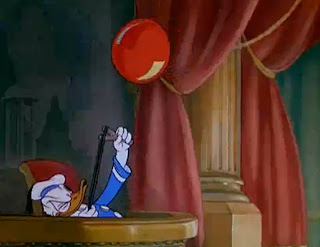 Donald begins heckling Mickey almost from the word go. It’s probably some form of payback in Donald’s mind, since he was heckled by the orphans in other Mickey shorts, when trying to perform. Mickey, however, does not take kindly to it, and starts retaliating. 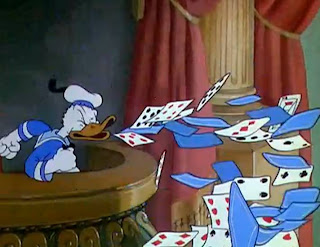 The short evolves into a back and forth between the two, with Mickey’s magic tools providing the impetus for some classic gags. My favorite is how he curses Donald to have a deck of cards come spitting out of his mouth. It happens five times in the short, but that doesn’t make it lose any impact. 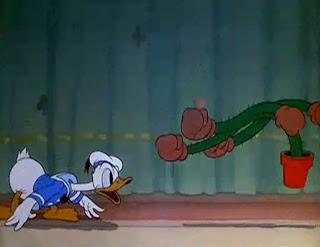 There’s also some classic transformations, as we get to see Donald changed into a kangaroo, fighting a cactus, and taking on Mickey directly. Again, this is the most involved Mickey has been in his own shorts in quite some time. It’s a welcome change, as he’s downright mean to Donald at times, but you still are rooting for him.

I think some people read my comparison between Donald and George Costanza wrong yesterday, when I said that Donald was a “stupid jerk who gets what he deserves.” I really meant that more about George than Donald. Donald just reminds me of George, because he is all id – he does whatever he wants, and often gets what he deserves because of it. That’s not to say Donald isn’t a loveable character, quite the opposite. We love him because despite how hard we try to be the unflappable Mickey who ends up doing most things right, more of us are like Donald than we admit. 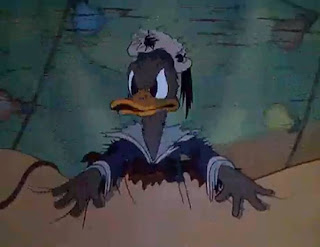 That’s why it’s so great to see the two of them together in this short. Mickey is the one we all love and want to act like - on top of things, having some fun, in control. But Donald is who we are, for better or for worse.