Not too long ago, I lamented that the Silly Symphonies had been lackluster in 1936, possibly due to the attention that Walt and his crew were paying to Snow White. I am happy to say that seeing The Country Cousin has revived my faith in the series, as it is a wonderfully funny and charming short.

As you could probably guess, this is a well-worn story, of the country mouse coming to the city to live with the city mouse. But just because we’ve all seen it or heard it a few times doesn’t detract from this version. 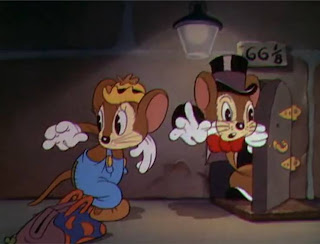 First of all, Abner, the country mouse, is a fantastic character. His design is different enough from Mickey to be distinct while keeping certain features, like the rounded face and ears. Instantly upon seeing him, I felt empathy for the poor guy. He is likeable right away, which is important because of the things he does in the short.

What things are those? Well, when Abner steps inside the palatial home that his city cousin, Monty, has inhabited, he is treated to a world full of light, lush furnishings, and most of all – food! There is a whole table full of food for Abner to indulge in, on one condition. He has to be quiet.

And that’s where the trouble lies. Abner gets overwhelmed by the amount of food available, and can’t control himself. He manages to keep from letting out yells or exclamations, but when he begins chomping down on some celery, he’s making just as much noise as if he had yelled. 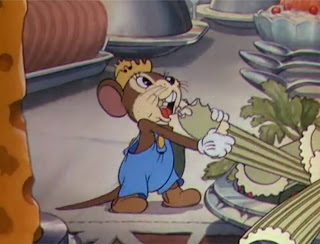 In a lot of ways, this part of the short is very much like Giantland, the black and white Mickey short that tells the story of Mickey climbing up a beanstalk to confront a giant. This is very similar, with the two mice on the table trying to avoid waking up a cat that is sleeping nearby. Their escapades into the “giant” food are quite humorous, especially when Abner gets into the sparkling wine. 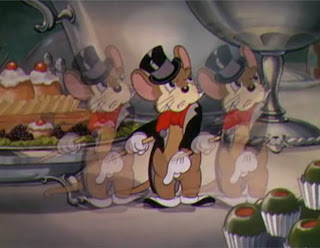 I seriously had to wonder what kind of family makes a feast like this then leaves it sitting out for several minutes with no one watching it. I mean, really, who does that? Their negligence ends up letting Abner box himself in Jell-O, as well as get really lit on champagne. 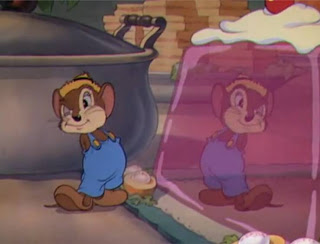 You can imagine what ends up happening – Abner makes a mess, the noise wakes up the cat, and chaos ensues. What’s interesting, though, is that Abner runs away from the cat, but that is not the gag fest you would expect. Instead, the focus is more on Abner getting outside the house quickly, and the strange cars and people that he has to avoid. 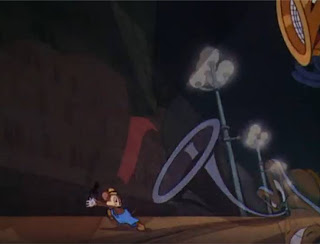 This part of the short is surreal, with cars, bikes and people zooming past our country friend. The hustle and bustle of the city proves to be too much for him, and sends Abner running down the tracks back to his home. Monty lets him go, I guess, because we never see him again after the cat begins chasing Abner.

This is a fantastic short, with some fun gags, but mostly because of Abner. You can probably read my affection for the character. He’s cute, funny and endearing. Hopefully, we’ll see more of him in the future.