One of my favorites among Donald Duck’s early cartoons is this one: Modern Inventions. Why? It’s a favorite among my kids, and we constantly quote the robot butler from this short: “Your hat, sir.” 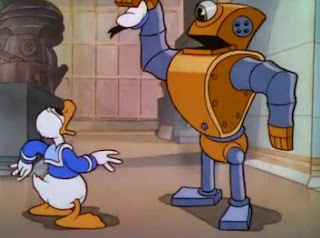 You’d have to live in my house to understand, but if you’ve seen this short, you know the robot butler is the best running gag we’ve seen in Disney shorts. That’s right, I said the best. Take Donald’s magic pockets or sleeves that he used in The Band Concert to produce flutes seemingly out of nowhere and combine them with a robot who keeps taking his hat, and you have comedy gold. Donald produces a series of sillier and sillier hats throughout the short, from a top hat to a Napoleon looking general’s hat. 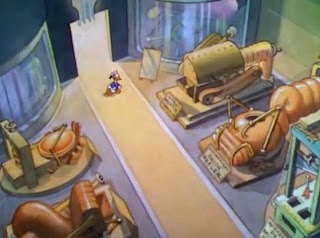 Aside from that running gag, the rest of the short features Donald’s interactions with various mechanical contraptions designed to “make life easier.” As anyone who has dealt with technology over the years knows, sometimes the new device designed to make things easier actually makes it harder. That’s the case for Donald.

He has the first attack come from the automatic bundling machine. Watching Donald get tied up in knots is funny, but it is of course his reaction to that that makes it so good. This is a short that could not have worked with Mickey, because Donald’s frustration and silly laugh make the humor work. 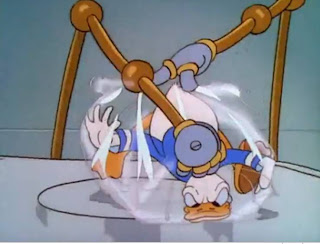 My personal favorite is the baby carriage. When Donald runs away from the robot butler (again), he dives into a baby carriage. This little sequence demonstrates my favorite parts of Donald’s character. He is fun loving, because he gets into the spirit of things, putting on a baby bonnet and playing along with the carriage that plays him music and rocks him. But as always, Donald has to try and push it too far, asking for a bottle, with disastrous consequences. 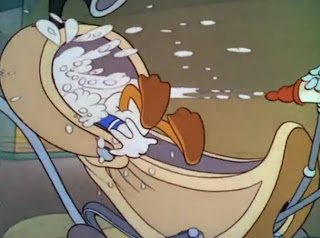 The final sequence, with Donald stuck upside down in a barber’s chair, is classic Donald. Watching his tail feathers get turned into a finely coiffed hairdo is funny, but I like the way he gets his face polished with shoe polish. 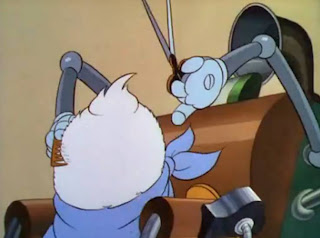 Donald’s frustration is classic, and it’s what makes us love him. I said it before, but Donald is what we all end up being, even though we want to be Mickey. Donald is like me, so I love to watch him go through things that are just larger, more cartoonish versions of what I’ve gone through.