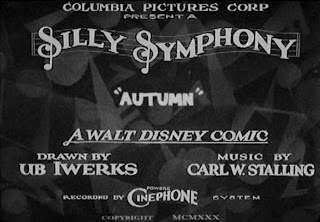 Take a long look at the title card for this short, Autumn, because it’s the last time that we’ll see Ub Iwerks and Carl Stalling together on a film. In January of 1930, Ub had just signed a deal to create his own studio. Unbeknownst to him at the time, the deal was set up by Pat Powers, who was hoping to use Ub to squeeze Walt into a less favorable deal. It didn’t work, but that is a topic for another day.

Ub’s last directorial work for the Disney studio was the third of the “Four Seasons” set of Silly Symphonies, Autumn. To me, it’s the best of the series so far, with all kinds of great imagery and a good framework that the action is built around. 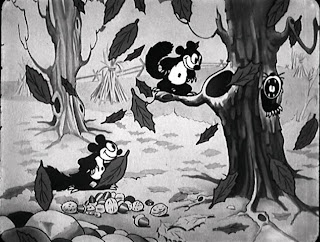 I know you guys probably get sick of me complaining about the lack of story in some of these early shorts, but to me, that’s what Disney is all about. The thing that makes some of Disney’s efforts stand out is the storytelling. Not necessarily that it has to be a superb, mind blowing story, but having a framework and plot that drives the action is key for my enjoyment. 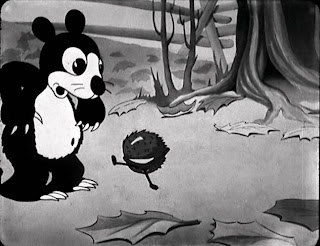 That’s what I love about Autumn. The idea is a simple one, that the animals are getting ready for winter. That’s it, but we get to see it carried out in a variety of ways. The squirrels are up first, gathering nuts. These are the most interesting characters in the short, because their design is so well done. They look like a hybrid between Julius, Oswald and Mickey, but in a good and original way. The squirrels have Mickey’s ears, Julius’ eyes and Oswald’s body type, but with a squirrel tail. I love the design, and they are very appealing characters, happy and free though they are working. It would be nice to see them again. 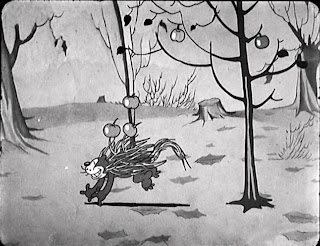 The other animals in the short are similarly engaged in preparing for winter. We see ducks on the pond, crows gathering corn and beavers building a dam. The ducks are probably the most interesting beyond the squirrels, because they march in military precision through the lake as the snow of winter comes in, and then fly in formation south for the winter, all to the marching music of Carl Stalling. 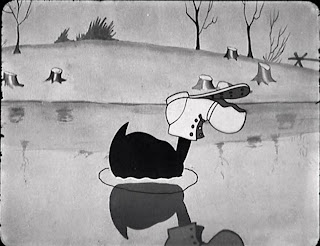 There are some other interesting bits, like watching one of the ducks get a boot stuck on his head, and move the boot like a bill. The other neat thing in that same scene is noticing the level of detail in the water, as the bank and the duck are reflected. It’s the same effect that was seen in Springtime with our Flip the Frog prototype, but a little more detailed here. 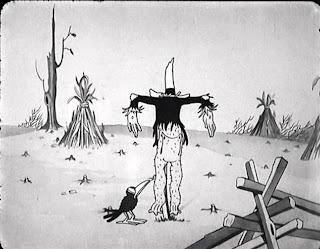 Autumn is just a fun short, and it moves quickly and happily along, pulling the viewer with it. That’s really what you want from a cartoon, and Autumn delivers in spades.

All images copyright Disney. All rights reserved.
Posted by Ryan at 3:36 PM