The second of the “Seasons” Silly Symphonies is Summer, following on the heels of Springtime. It’s truly an Ub Iwerks film, with silly dances, a succession of gags, and a series of actions that end with a spider eating some of the protagonists. But on the whole, it’s really unremarkable, not the best work from the Silly Symphonies so far. 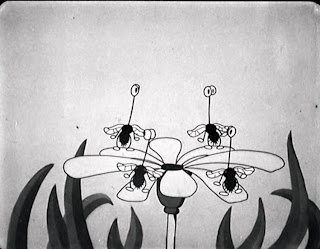 It’s a beautiful short to behold, as the animation and the backgrounds are extremely well done. The characters’ movement is very fluid and enables the action to be moving constantly. That’s good, because as with most of the Disney shorts at this time, there is little story to hold the cartoon together.

That’s not necessarily a bad thing in this case. This short is truly a celebration of nature, as it features all sorts of creatures of the bug world in various incarnations. If the boys at Pixar did not watch this before they did A Bug’s Life, I’d be shocked. So many of the characters from that film are similar to ideas here that I would think it had to be an influence. 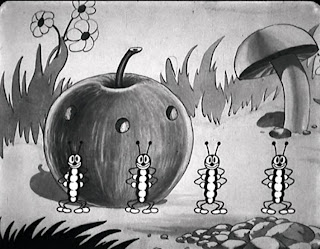 The short begins with a quartet of caterpillars, doing the by now patented Ub Iwerks four abreast dance sequence. It is very interesting that a man so amazingly talented and creative as Ub kept returning to the same idea – four creatures side by side doing a silly dance. Not to say that it’s not entertaining. There is a new twist here as the characters roll, stack on top of each other, and then turn into butterflies. But it seems odd to me that so many of Ub’s films feature this sort of sequence, from the Skeleton Dance forward.

Of course a lot of that could be do to production schedules. Animating and releasing so many films a year had to make it a temptation for Walt and his team to take shortcuts, and by all accounts they did so. That’s part of what makes Summer a little interesting, is there is no reuse of story or sequences from other films here. As far as I can see, all the material is original except the four abreast dance scene. 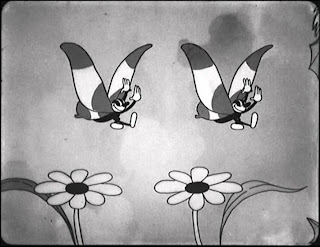 There are some very imaginative sequences here. After the caterpillars become butterflies, they land on a preying mantis that does its own crooked dance, then falls in a pond. Water bugs do a skating routine on top of the pond, before being interrupted by a dragonfly. The dragonfly is pulling a lady bug behind it like a skier, which is a great idea. 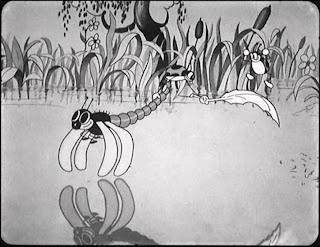 Of course the real coup de grace is the final sequence with the flies. After some ladybugs are pushed aside by a flower spurting out of the ground, four flies appear on top of the flower and do a dance as the lady bugs spin the flower. Then, the flies pick up a sleeping spider, by each of them grabbing a corner of its web. They bounce the spider up and down on the web, using it as a trampoline. But the spider gets his revenge, swinging a web line up to a tree branch and then devouring the flies. It’s a dark ending to be sure, but very funny and somewhat deserved. I mean, the spider was minding his own business, and these flies messed with him, right? 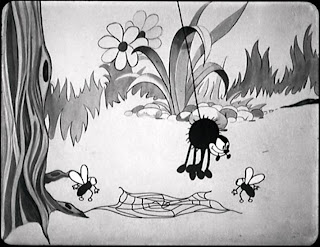 Summer is entertaining and silly, no doubt. But after what I saw with The Haunted House and Wild Waves, I’m somewhat surprised that there is not more consistency and that this short is not up to par with those. Sure, it’s a Silly Symphony versus a Mickey, but there is none of the experimentation we saw in Springtime or the lighting effects like in The Haunted House. By this time, though, Ub Iwerks was getting fed up with being at Disney, so that could have something to do with it. More on that later.


All images copyright Disney. All rights reserved.
Posted by Ryan at 9:34 PM