Jungle Rhythm is the latest Mickey musical number, and this one is a little different. Although it still suffers from the issue of having no real conflict or plot, you can see the story influence starting to creep in. With just a few minor tweaks here or there, Jungle Rhythm could have been as good as any of the Oswald shorts. 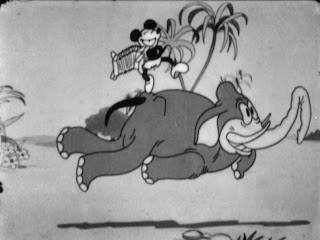 The basics are that Mickey is riding an elephant through the jungle, on a hunt. He climbs down from the elephant, shoots at a bird, which flies away and leaves him in a confrontation between a bear and a lion. A group of animals nearby starts playing music, using Mickey’s accordion that he left on his elephant, and the lion, bear and Mickey begin dancing. The rest of the short focuses on the musical numbers. 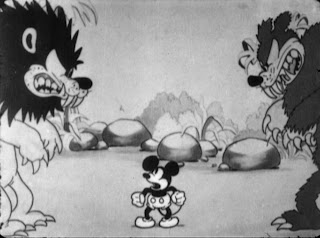 The outlines of a story are there. There is the brewing conflict between Mickey and the lion and bear. The music serves a purpose, in bringing that conflict to an end. But there is still something missing, such as near the end, after Mickey has abused no end of animals as his instruments, he does the same with a lion. The lion is obviously perturbed when Mickey pulls out his tongue and plays it like a bass, or when the mouse pulls out its whiskers. But the short ends before anything happens, leaving a question mark as to how Mickey escaped an angry lion. It’s also interesting how many motifs from prior Disney efforts are repeated here. The jungle theme is something we have not seen since the Alice shorts, but it was very popular in those films. Alice riding an elephant and hunting in the jungle was a staple of early Alice shorts.

Also repeated here, I think for the first time since Steamboat Willie, is “Turkey in the Straw” as a musical piece. Mickey plays the song on some animals, similar to the way he did in his debut. It’s interesting to see that, since most people today think of that song as the iconic piece of Steamboat Willie, but here it’s repeated in a much lesser known context. 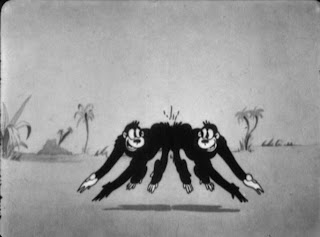 I also have to say that Ub Iwerks’ silly dancing numbers are constantly amusing. We get two monkeys in one sequence and two ostriches in another. We also get a lion that pushes its mane down to use as a grass skirt and become a hula dancer. All three are great flowing animation that are fun to watch, even if they’re not necessarily story driven. 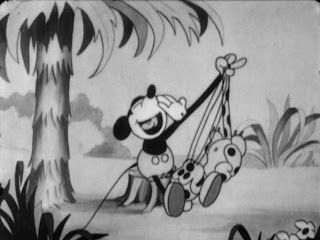 I must confess, I am a story guy. I pick apart movies today the same way I am doing to these films, so I probably focus on that a little much. But much of the reason that I am a story person is because of the Disney films. Story is always a strong point of the features, so that’s what I am used to. I think watching the shorts is a great introduction, though, because it really is helping me to see where many of the things I came to love about Disney came from.
Posted by Ryan at 10:05 PM