So, for the next short, there is quite the disagreement as to what comes next. On the More Silly Symphonies DVD, Hell’s Bells is listed first in chronological order. On Disneyshorts.org and BCDB, Springtime is listed first. I’m going to go with my web friends on this one, and go with Springtime as the first one. Don’t let me down, fellas.

Springtime is just neat. There’s no other way I can describe it. As a Silly Symphony, it’s meant to be the kind of music video that the Mickey shorts have become at this point, so the rules of storytelling are a little looser. That said, it still manages to have a fairly linear progression, with some great gags, interesting animation and a fantastic score.

In case you did not know, Springtime is the first of a series of four Silly Symphonies that would be released covering the four seasons. Each uses a piece of Vivaldi’s landmark Four Seasons, but also then delves into other music as it goes along. 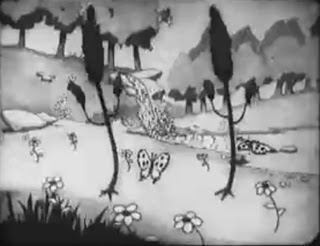 In Springtime, the wilderness is awaking from what I presume was a winter slumber, and is coming alive with dancing, music and song. The opening immediately struck me as something that would be visited later in Flowers and Trees, the first color cartoon. It’s a pair of trees dancing, swaying from side to side as the plants around them join in. I have not seen Flowers and Trees in a while, but I seem to recall it featuring the same scene. 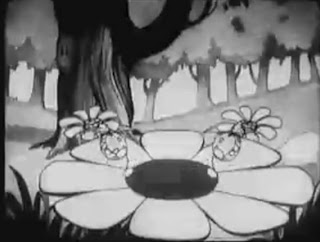 There is no real story to the short, as I said, but it does follow a somewhat linear progression. The first half of the short is not quite as linear, as it pans over from the trees dancing to a trio of flowers that is also dancing. Then, the middle flower runs toward the camera, opens its petals and serves as a platform for two dancing lady bugs. It’s a neat gag, and well animated.

There are a few other fun pieces in the beginning of the short as well, such as when the lightning attempts to strike a cloud, and the cloud keeps dodging. When it’s finally struck and releases rain onto the ground below, a tree takes the opportunity to shower in the rain, until it too, is struck by lightning. 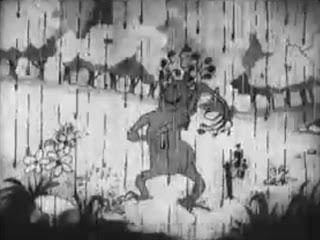 In the second part, though, after the rain, there is a great storytelling device, as the action follows from one participant to the next in order. The first scene features a pair of grasshoppers, then they fall into the mouth of a frog, and the action shifts to the frog. The frog runs into a spider, then a family of frogs. Then a bird comes along and chases the frogs. Each time, we go from a smaller animal to a larger and so on, moving forward with snappy dance routines and music. 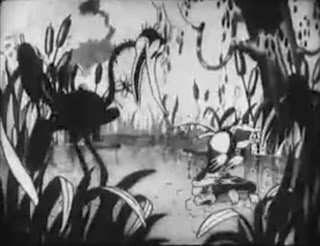 It’s been said that the Silly Symphonies were a sort of research and development lab for the Disney animators, and that is evident in Springtime. A couple of things stand out that will bear future fruit. The first is a sequence featuring that frog, where he is dancing on a log. The animation shows the frog and his reflection in the water, complete with ripples on the surface of the water. When you’ve seen the Alice shorts and the early Oswalds with limited backgrounds and no effects, it’s a stunning change. 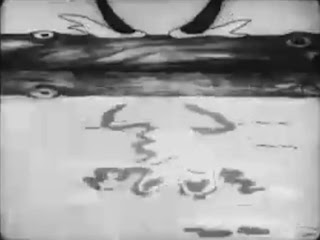 The second thing that stands out is the frog himself. When Ub Iwerks left the studio to form his own animation career, he started out with a character called Flip the Frog. Flip and the frog in Springtime look very similar. Flip would evolve, but it seems as though he may have gotten his start here.
Posted by Ryan at 9:45 PM