I admit, at this point, the Mickey musical number shorts are getting a bit old. Every time I think the subject will change to something different, Mickey ends up playing music on some animals or dancing away a tune. Mickey’s Choo Choo is more of the same, but it features some noticeable differences that make it well worth watching.

The first thing I noticed when the short opened is the unique opening. The film opens with a locomotive backing away from the viewer, with Mickey as the engineer. Instead of a black object coming towards the screen and fading to black, it’s instead backing away from the screen and opening up the picture. It’s a neat touch and one that has not been seen before in the Disney shorts. 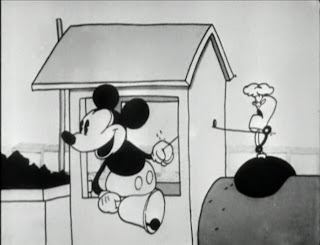 But the real feature that stands out is Mickey’s design. He was definitely different in Mickey’s Follies, but since he was not featured as much in that short, I didn’t notice it until watching this one. The Mickey from the last two shorts is much more like the Mickey of today. His facial features have some distinct differences, like the eyes, but his body design is now much closer to what modern fans remember. The loose hose like arms and small circle body have been replaced with thicker arms, a more oval shaped torso and his trademark shorts.

Again, it’s not a huge sea change, but it was enough that I noticed the difference here from the original shorts. Mickey’s design would change many times over the years, but this looks to be the first of those changes. 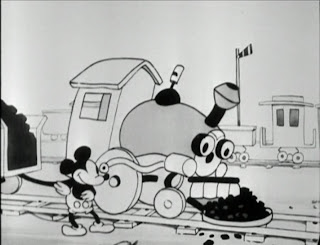 The other thing this short is noticeable for is the use of dialogue. Not just squeaks, one liners or musical numbers, but a full on dialogue between characters. Minnie approaches and has a conversation with Mickey. And the controversy over Mickey’s voice in the earlier shorts should not be an issue here, as it is clearly Walt speaking for Mickey here. The voice is immediately recognizable. 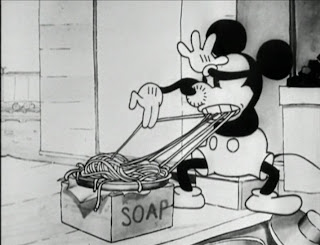 I guess this far into the review I should discuss the story of the short, but honestly, it’s not that important. As is becoming the usual with the Disney shorts of this time, the story does not feature a plot or conflict. The basics are Mickey is getting his train ready to leave the station, and takes Minnie along after a musical number. The train heads over the hills, loses its car, and sends Minnie and Mickey flying through the hills. The short ends when the car crashes and reassembles into a see saw car that they ride back up the hill. 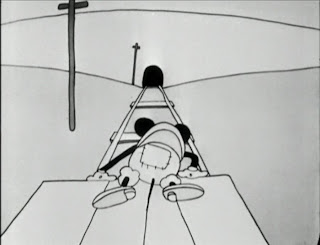 There’s some nice animation work in this short as well. I mentioned the opening, but there’s a few other pieces that stand out. As the car runs down the hill, there are some great shots from behind of Minnie hanging on for dear life as she goes through a succession of tunnels. There’s the same sort of view of a cow being chased by the runaway car, and a similar shot at the end with Mickey and Minnie on the see saw. All are similar to animation from Plane Crazy, but they’re still very interesting and a break from the every day. 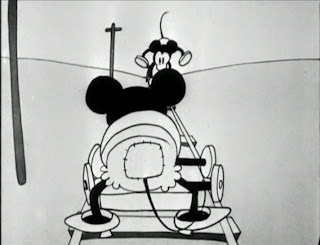 I’ve read some comments about the short on Patrick Malone’s Disneyshorts.org that people disliked the humanized train, which I can understand. I didn’t really have an issue with it, but it does seem out of place in the short. However, the interesting look of Mickey, the use of dialogue and the neat animation makes this a very intriguing short.
Posted by Ryan at 10:17 PM