The first of the Silly Symphonies, the Skeleton Dance, is another Ub Iwerks tour de force, albeit different than Plane Crazy or some of his other masterpieces. The Skeleton Dance is madcap fun from start to finish, a pure celebration of the macabre that manages to be happy at the same time. 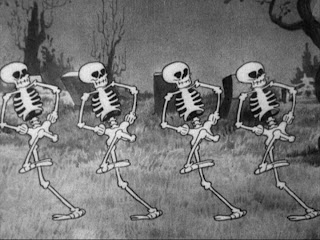 To back up, though, this is the first of the Silly Symphonies, which marks another turning point in the Disney animation story. Up until this point, everything had been focused on a single character – Alice, Oswald or Mickey. With the advent of this new series, Walt and his crew were freed of that restriction, and they were able to experiment.

This was the first one, so of course, it was Ub Iwerks who handled all the animation. The title card even says “Drawn by Ub Iwerks,” which is a bit different than the Mickey cartoons which said only “A Walt Disney Comic By Ub Iwerks.” For Ub, though, this had to be a chance to spread his wings a bit after the repetition and time constraints of the previous series. 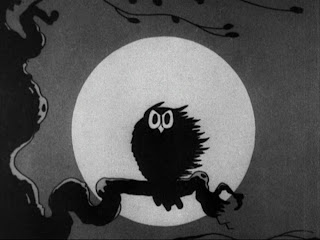 He certainly took advantage of it, creating a short that is both a little scary and a little funny, balancing the two expertly. The open of the short is a great bit with the moonlight and an owl on a tree. The owl’s hoots are timed with the music, as the wind blows through and a branch descends onto the owl, in the shape of a hand. The owl’s shock is captured perfectly by the animation.

The score here is really superb, and although many people have assumed it was adapted from the Danse Macabre, Carl Stalling swore that it was merely a foxtrot with a minor key. The main thing, however, is that the score and the animation work together perfectly, completely in syncopation. Sure, there have been some good gags in the Mickeys, but this is a whole different level. 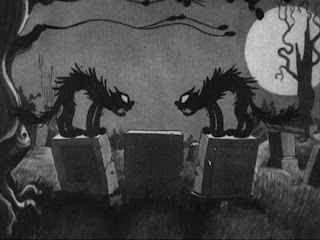 A great example is when there are two cats perched on top of opposite gravestones. Each cat meows at each other in syncopation. Then, they pull each other’s tails, and the music builds with each successive pull of the tail. It’s a very impressive piece of work, but it’s just the beginning here.

The true masterpiece of the short is the dancing skeleton sequence. I really don’t know what to say about it, except that it’s wonderfully done. The skeletons move in ways that no other character I have seen in these early shorts. The sequence most have seen is when their heads stay still and their bodies sway, but there are many, many more. 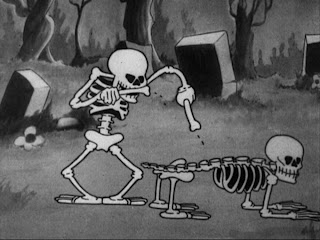 Again, there is no story to the short, but in this case, that’s okay. The Skeleton Dance is really just a music video of the Stalling composition. That’s a crude way to put it, but it’s the best I can come up with right now. Since there is no focal character, the short is truly just a celebration.

Anyone who’s watched Disney specials around Halloween has seen parts of this short, and it still holds up today. It’s a classic no doubt, and the first of many Silly Symphonies to come.
Posted by Ryan at 10:08 PM