After the disappointment of When The Cat’s Away, the next short, The Plowboy, was a great improvement. It’s not that there are such huge strides between the two, but for some reason, The Plowboy was much more entertaining to me. 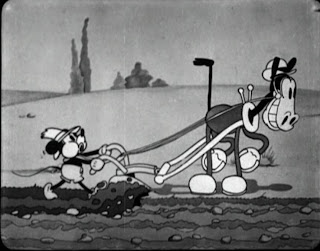 The plot is still very thin, something that is seemingly a hallmark of the Mickey Mouse cartoons in these early years. The basics are that Mickey is trying to plow a field, but gets distracted by Minnie. After forcing a kiss, Mickey gets mocked by his horse, and tries to react, when a bee stings the horse. The horse drags him along, breaking the plow handle, so Mickey forges a new one out of a pig. 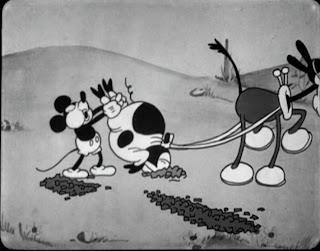 If it sounds ridiculous, it is. But in this short, it works a little better than in the previous ones. The humor is grounded in the farm landscape and Mickey plowing the field, but there’s some crazy stuff going on that is the counter point to that. I can’t really describe it properly, but it works.

I think one part of it is the score, which although simple, is much better complimented by the visuals here than in some of the other Mickeys. The very beginning features Mickey whistling his way through his plowing, with Horace Horsecollar, his horse, joining in the fun, as well some various farmyard animals behind them. Since it’s just the beginning of the short and not a musical vacation right in the middle, it serves as a great introduction to the character. 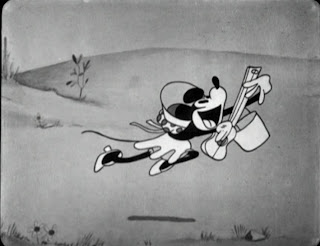 One notable part of the short to me was Minnie’s appearance. Rather than her typical appearance of being approached by Mickey, she makes a jaunty dance into the scene, accompanied by her own animal, Clarabelle Cow. She even gives her signature “yoo hoo” call to Mickey when she stops. It’s a very neat little thing for someone like me who likes Disney music, and enjoys “Minnie’s Yoo Hoo” by the Walt Disney World Saxophone Quartet, but I digress. 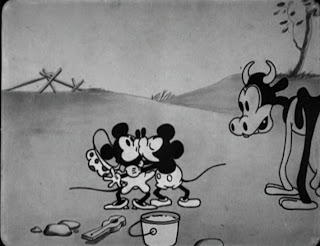 Another thing I note here is that there’s more character animation in this short than in When The Cat’s Away. I related to Mickey as he felt the frustration when Horace mocks him for Minnie’s reaction to the forced kiss. I felt that frustration, too, because I’ve been on the other end of that mocking. And you can really tell in the animation that Mickey is fed up with it. 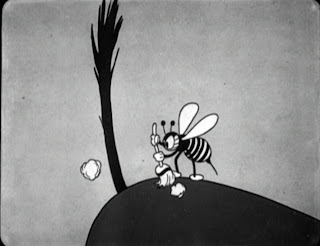 That’s probably the thing that sets The Plowboy apart, is the way the characters move and react. When Minnie is watching Mickey milk her cow, you can see her shy flirtatiousness. Mickey’s frustration is another example, but there are more. It’s fine work by Ub and his team.

Sure, The Plowboy is not a masterpiece, but it’s great fun, and it’s somewhat original. That makes it a good cartoon in my book.
Posted by Ryan at 8:48 AM