It’s almost as if sometime before The Haunted House, Walt went into a story meeting with his animators and said, “Why is Mickey always bursting into song? Give him a reason to sing!” I don’t know if such a thing happened, but if it did, the result would have been The Haunted House or this short, Wild Waves. 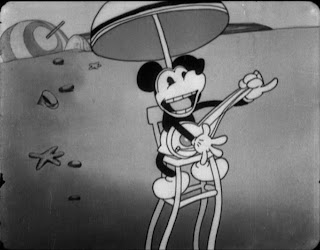 Once again, the story of the short provides a way into a musical number, which makes the music piece so much more enjoyable. This short’s story is kind of a rehash of the Oswald short, All Wet. Mickey is serving as a lifeguard, same as Oswald did, and he has to save a girl, in this case Minnie. There are very similar scenes to All Wet, such as Mickey on the lifeguard stand and his careening through the waves. 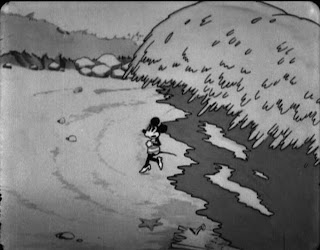 Whereas in earlier Mickey shorts the copying from the Oswald shorts was more derivative, this seems much less the case. The animation is much fresher and more detailed than that earlier work, and the characters are so different that it makes this a fresh take on the subject. 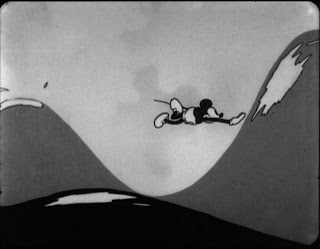 Where Wild Waves branches off is when it comes to the second half of the short, which is the musical number. When Mickey saves Minnie, she cries because of the ordeal, and Mickey decides to comfort her by performing a dance to “Sailor’s Hornpipe.” Soon, the other animals join in, and the patented Ub Iwerks silly dances ensue. What is interesting about this short is the subtle changes in Mickey from his early appearances. The evolution of his design is almost complete, as we see here the rounded shoes appearing much as they do today, a little more bulbous and full. His limbs are thicker, and his eyes are much more expressive. This has evolved over the past few shorts, like Jungle Rhythm and The Haunted House, but it’s very noticeable here. 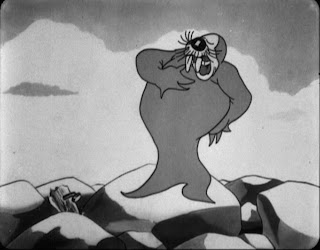 The other change I noticed in this short is the difference in Mickey’s character. In the early shorts, he was aggressive and rude, grabbing Minnie in Plane Crazy and planting a kiss on her, regardless of her wishes. This time around, after performing his dance, Minnie professes him to be “her hero,” Mickey shifts his shoulders and blushes, obviously embarrassed. If you had not seen the other shorts early on in Mickey’s career, you wouldn’t notice it, but it’s a big change in his character. 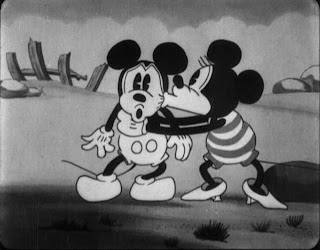 This is part of what Leonard Maltin talks about on the DVD, that as Mickey evolved, Walt and his crew found him more and more uninteresting. It was hard to find situations for Mickey to be funny, because he was always heroic and upstanding. Soon, the focus would shift to Mickey’s supporting cast, at first Clarabelle Cow and Horace Horsecollar, but later Goofy and Donald Duck.

Finally, one last interesting thing about Wild Waves. The short features two instances of Mickey singing, and a few instances of him talking. We know that Walt provided the voice for Mickey when talking, but his singing voice seems totally different. I would guess that Walt did not sing for Mickey, based on this short. Does anyone know who did? I do not, but would be curious to find out.
Posted by Ryan at 9:31 PM