The Skeleton Dance was a tour de force of animation, and launched the Silly Symphonies series with a bang. El Terrible Toreador is the follow up, and it is none of the above. With animation not on par with the previous effort in the series, and a very weak musical/story connection, El Terrible Toreador is a noticeable departure from the quality you would expect in these early Disney shorts.

It’s not to say that this is a terrible cartoon, but it’s just not up to par with what the cartoons preceding it have done. The basics of the short are that a lovely barmaid, Carmen, is coveted by both a Mexican officer and bullfighter, or toreador. They first encounter Carmen in a cantina, and the toreador manages to help her fend off the officer’s advances. Then, the second half of the short shows the toreador in a bullfight, with the officer trying to sabotage him. 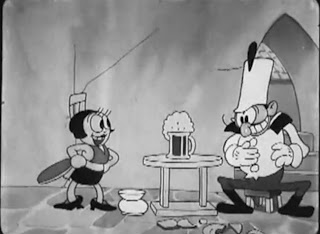 The two sections are not very well put together, which is just the start of the problems. The beginning is not held together with much of anything except the music, which is merely some redone classical music with Spanish influence. Carmen’s dancing and actions are very lacking in character animation. It’s mostly rubber hose style animation, with Carmen kicking the tray on her head, extending her arms as the officer kisses them and other similar actions. 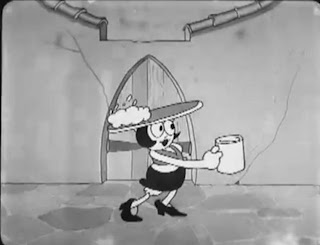 When the toreador shows up, the crowd goes nuts, both in the cantina and in the arena where the bullfight is staged. That’s understandable, because he is really the only character in the short worth following. In his first appearance, when he confronts the Mexican officer, he steals the man’s beer with a swagger and style that makes him the instant hero of the piece. The character of the toreador comes through in that moment, but then the bullfight sequence undermines it. 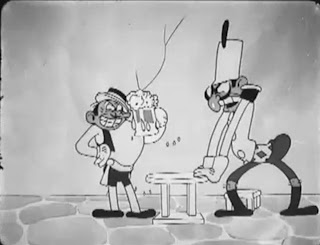 The second half of the film, when the toreador is in the bullfight and the officer and Carmen are in the stands, is frankly baffling. After the confident figure shown in the cantina, the toreador switches to a prancing, dancing caricature in the bullfight, playing pattycake with the bull and even dancing a jig. It’s a sharp departure from the character established in the first part. Very different, and not in a good way. 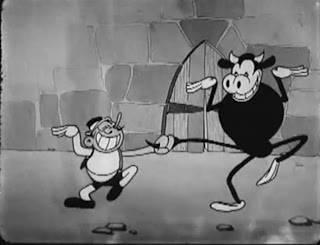 The officer tries to derail the fight by putting pepper on the flowers that Carmen throws to the toreador, but it doesn’t work. After both he and the bull sniff the pepper, a real bullfight ensues. But it lasts only a few moments, when the toreador manages to reach down the bull’s throat and pull it inside out. 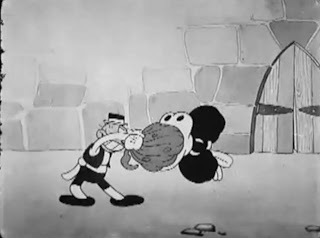 It’s hard to really say what the main problem is with El Terrible Toreador, and I’m sure that at the time it was probably better received than I’m giving it credit for here. There’s something just missing versus the Mickey shorts and it’s nowhere near as good as The Skeleton Dance. The characters are not that engaging, the music does not help the story along like in other shorts and there’s just not much for the viewer to latch on to.

All images copyright Disney. All rights reserved.
Posted by Ryan at 3:58 PM