The improvement I saw in The Plowboy continues in The Karnival Kid, a short that really takes the Mickey Mouse cartoons to a new height. The animation is inventive, the score is great, and the characters even talk! Yes, Mickey utters his first real words here, and they’re funny to boot.

That’s the real story of The Karnival Kid as it relates to our project – the milestone of Mickey speaking. Walt provides his voice, and the soon-to-be trademark squeaking tone is an instant classic. I’ve always loved Walt’s original Mickey voice, and hearing it here for the first time is a real treat. 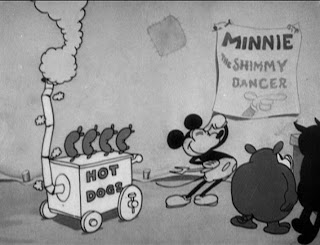 The story of The Karnival Kid is broken into two sections – Mickey the hot dog vendor at the carnival, and Mickey sneaking away later that night to woo Minnie the shimmy dancer. Both sequences are great, but in different ways. 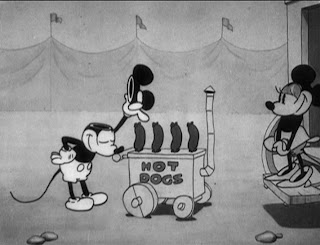 The first sequence is very reminiscent of the Oswald short, All Wet, where Oswald was a hot dog vendor at the beach. The gags that were used in that short are recycled here, such as Mickey selling Minnie a hot dog that then tries to run away. Mickey catches the dog and spanks it like a child. The same sequence occurred in All Wet, but I have to say it’s still funny. 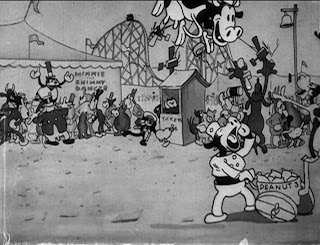 The other thing that strikes me about the first sequence is the sheer kinetic energy going on. The opening shot is of the carnival grounds, and it’s frantic, with characters moving from foreground to background, side to side, up and down. It’s visual overload, but in a good way. It really gets across the idea of a carnival atmosphere.

Pete (at least I think it’s him) serves as the carnival barker, and has a quick fight with Mickey when our favorite mouse interrupts Minnie. But Pete’s main contribution here is to be the puppet master for a shadow puppet of Minnie the shimmy dancer, in a neat opening gag. 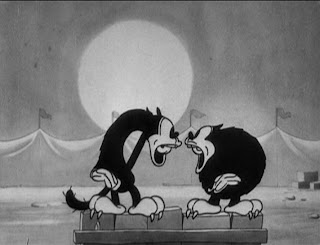 The second sequence is much quieter and simpler. Mickey shows up outside Minnie’s trailer at night with a piece of fencing and a couple of cats. The cats proceed to sing “Sweet Adeline” while Mickey accompanies them on the guitar. Most of the action is the cats fighting each other for volume or with claws. Mickey is featured very rarely.

The opening of the sequence is neat, with the title card literally melting away, in a neat piece of animation. However, there really seems to be no reason to tack on this sequence, and it ends rather abruptly with Pete throwing trash cans at both Mickey and the cats to end the short. 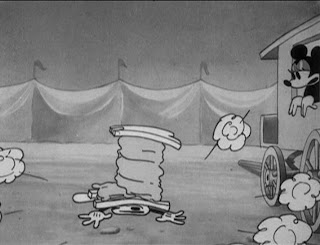 The Karnival Kid is good, but not great. Still lacking in the strong plot of the Oswald shorts, the early Mickeys seem to rely on the sound and music as the backbone of the shorts. That was a sensation at the time, no doubt, but it does seem like some of the growth in the animation we saw in the Oswald series has slowed. Perhaps Walt realized that as well, which is why our next short, The Skeleton Dance, launched a whole new series.