So, it would seem that in my quest for chronological perfection, I have misplaced a Mickey Mouse short. The Barnyard Battle, which I viewed today, should have been reviewed before The Plowboy, but such is life. This is still an interesting short for a couple of reasons.

The foremost reason this short is so intriguing to me is that it is an idea that Disney has done twice already, once in the Alice series and once in the Oswalds. It’s a war short, just like Alice’s Little Parade and Great Guns, and it even uses some of the same gags. If I had to choose between the three, Great Guns would be the best, but The Barnyard Battle is a close second. 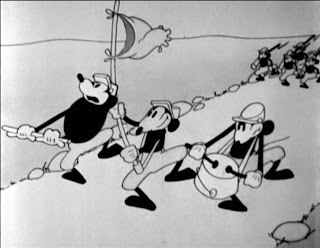 The basic plot of the previous shorts is replicated here, as mice and cats go to war with each other. In comparison with the others, The Barnyard Battle is a bit more fun with its recruitment drive, with the mice playing “Dixie” and doing a Spirit of ’76 march before heading off to battle. 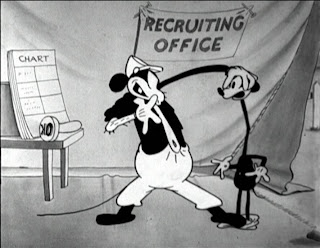 Mickey gets sized up in a funny early scene, where he gets the chance to have the tables turned on him. For the last few shorts, Mickey has taken advantage of animals around him to play them like instruments. This time around, it’s Mickey who gets turned into an instrument by the recruiter. It’s not a big deal, but it cracks me up to see the reversal of fortune. 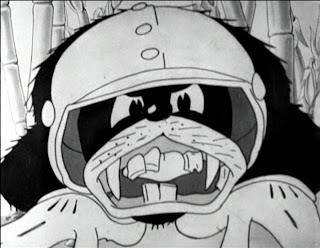 The introduction of the cats is done well, in the technique that has been used a few times by the animators, of having the subject coming straight towards the camera and blacking out the screen. It’s been done a few times now, but it’s still a neat idea. 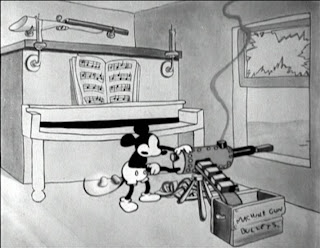 The real intriguing part of the short, though, is when Mickey is in an old house, firing a machine gun at the cats. First he runs out of bullets and uses piano keys instead, but then Pete manages to get inside. This is where Mickey’s personality really comes out, in the strongest piece of personality animation I have seen in the Mickey shorts. 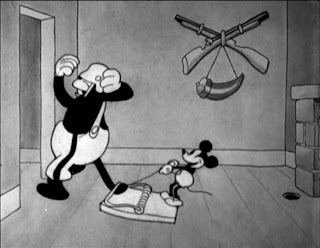 Pete menaces Mickey, then we see Mickey hem and haw, stalling as he tries to figure out an escape plan. With his smiles, his shuffling of feet, his bowed head, Mickey gives off the sense of fear and nervousness perfectly. It’s a great piece of work by the animators. Even funnier is when he manages to escape and clap a mouse trap on Pete’s tail. The image of Mickey surfing around behind Pete on the mouse trap is the enduring image of the film for me. 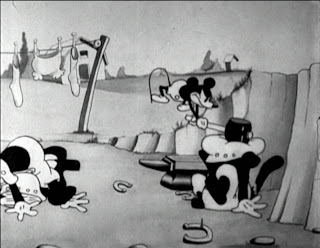 The finale is a repeat again, showing Mickey positioning himself outside a crevice, and clocking the cats on the head with a hammer as they come out. Julius and Oswald did this with their tails, but Mickey with a hammer is pretty good, too. The only problem is that it’s been done before. That’s the only issue I have with the whole short, is that it’s less a Mickey short than a repeat of the earlier shorts. Still, the scene of Mickey in the house with Pete is what makes it all worth it.
Posted by Ryan at 11:04 PM