Alright, so now we have the Silly Symphonies without the men who really created them – Ub Iwerks and Carl Stalling. So how does the series hold up in Cannibal Capers? Surprisingly, very, very well.

Director Burt Gillett and his animation team, including Les Clark, took a little different approach to this one. The idea is still simple, the cannibals are gathering for a tribal dance, and are interrupted by the appearance of a lion from the jungle. So there is still a big musical number and silly dances.

The difference is that in this short, the focus is very much on playing with the camera and seeing what inventive things can be done. For example, the opening of the short features what looks like a bunch of trees, swaying in the wind to some chanting music. 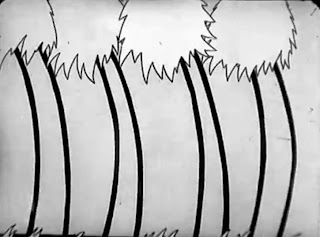 As it goes on, though, the camera pulls back and pans up at the same time, revealing the tree trunks to be the legs of the cannibals, and the tops to be their skirts. It’s a very cool opening, and shows some idea of what we are in store for with Cannibal Capers. 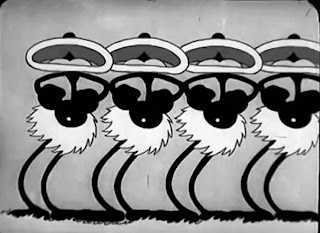 After that, we see the four cannibals dance, and then the camera pulls back yet again, revealing the vast landscape of the cannibal village, and showing that these four are not alone, but in fact are performing for their cohorts. It’s a great reveal that moves things forward at the same time. 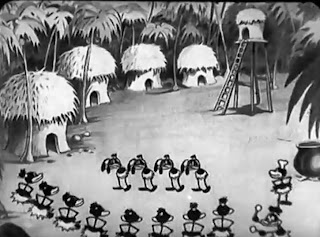 We see the cannibals preparing for a feast, including mistaking one of their own for a turtle and tossing him into the boiling pot. It’s a fun case of mistaken identity, as the cannibal uses his shield to dance like a nearby turtle, but then gets grabbed by the cook and thrown in. 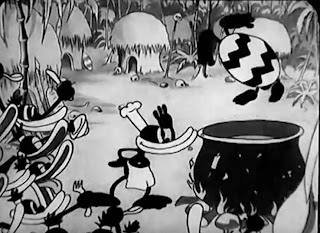 When the lion shows up, everyone scatters, and another camera trick ensues. The camera shows the lion in the big picture of the village, then zooms in to him, and shows the lion charging toward the camera with a roar. Again, a new trick to the animation arsenal. 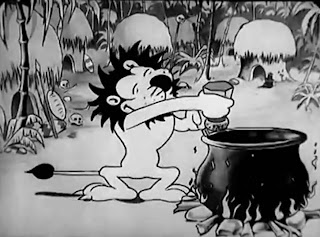 The ending is fairly straightforward, as the lion chases our poor friend who had been thrown in the pot. The tables get turned, though, as the lion roars so wide that his teeth fall out, and the cannibal picks them up and uses them on the lion. 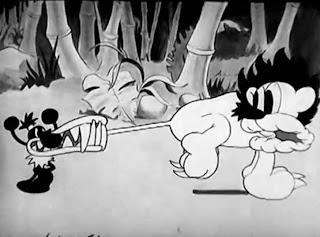 Cannibal Capers is by no means high art, and I’m sure it would be offensive to African-Americans today. However, all that aside, it’s entertaining. The plot flows smoothly throughout, but still manages to squeeze in some fun dancing sequences and craziness. There are the nifty camera moves I mentioned above, but otherwise the animation is a little simpler than the earlier shorts, as the cannibals are very much stick figures that use rubber hose animation in their movement. Overall, a fun short, a good story, but it lacks some of the greatness of something like The Skeleton Dance.
Posted by Ryan at 2:27 PM