In the six months that I have been doing this (has it been that long?), I have not come across a more aptly named short than Just Mickey. It’s a six minute short that features only one action – Mickey playing a violin. How can that possibly be interesting? It is, and that’s a testament to the Disney animators. 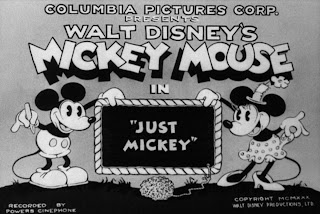 It’s first worth noting that this is the first Mickey short not by Ub Iwerks. What’s interesting is the title card is very different as well. For the original Mickey shorts, we had a simple Mickey and Minnie on either side of the title, with the “by Ub Iwerks” credit underneath. This is very different, a more detailed Minnie and Mickey, no credits, and a new “Mickey Mouse” title treatment. This is the Mickey that Floyd Gottfriedson would go on to feature in the Mickey Mouse comic books for many years.

But the true experiment of this short is the idea of having Mickey on stage with a violin, and that’s it. The short begins with a neat gag involving some depth, as the curtain opens to reveal another curtain, which opens to reveal another and another and so on. Mickey is revealed at the very rear of the stage, and stomps up to the front, coming closer and closer. It’s a very nice show of depth in the animation. 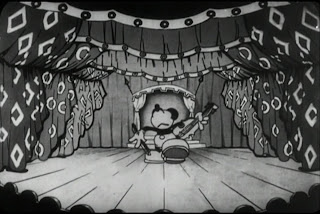 The fun begins with Mickey playing a fast paced number, getting a little more frantic with each passing moment. The thing that keeps your interest, though, are the expressions on Mickey’s face. He goes from annoyance at a heckler, to passion for his playing to happiness at a job well done from moment to moment, with natural transitions, not just jumping from expression to expression. 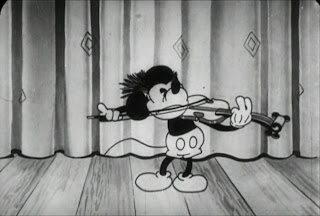 The scene is aided by the switches in perspective. The scene jumps from a wide shot of Mickey straight on, back to a close up on Mickey from the waist up, to a scene of Mickey on stage from slightly left of center. It is an amazing way to see this short. When you think back to the side scrolling model of the Alice cartoons, it’s astounding to see how far we’ve come in only a few short years.

Next, we get Mickey playing a sad number, with his expressions reflecting the sadness of the song. He weeps, blows his nose and frowns, all in perfect style. It’s a true reflection of emotion pulled off by the animators, just the way the first song was. 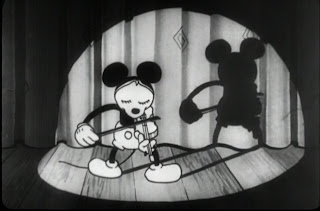 The final song is the William Tell Overture, which goes from the melodrama of the previous tune to an all out comedy. Mickey loses his balance, scrapes along the floor, pops up and down and does some great acrobatics. 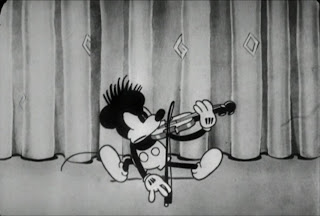 Just Mickey manages to make the single premise interesting and entertaining, even though in theory it probably should not be. That’s not to say it’s the funniest of the Mickey shorts or the best, but I can imagine the animators took this as a challenge to create a new range of expressions and emotions through Mickey. I have to say they succeeded.
Posted by Ryan at 9:52 PM