Once again, I have to lay aside my own earlier objections about story and the like to simply say that I enjoyed Mickey’s Follies, the latest short. Although it’s not one of the best so far, and the music/dance numbers are becoming repetitive, simply the inclusion of “Minnie’s Yoo Hoo,” declared here as Mickey’s theme song, makes this a great short. 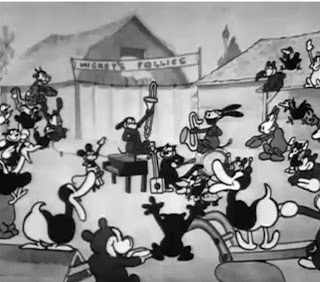 For those who haven’t seen it, Mickey’s Follies falls back on an old theme of Walt’s, all the way back to Alice’s Wild West Show. Out in the barnyard, Mickey and friends set up a vaudeville show, with a tattered sheet for a curtain and acts parading out behind it. This is something that has been seen in Disney’s shorts before, so the setting itself is not all that interesting. 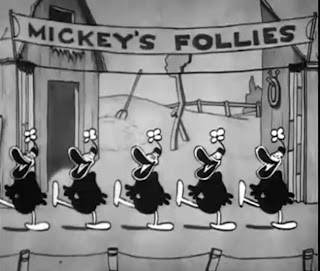 There are three acts preceding Mickey in the show – a dance of ducks to a take off on “Suwanee River,” two fighting chickens, and an operatic pig. Each of them is entertaining to a degree, but mostly they are there as great syncopated musical numbers. Just like in The Skeleton Dance, the music and animation here work together to maximum effect. 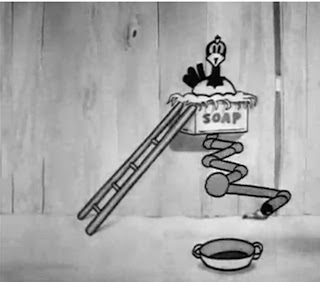 There are some great gags in these early acts as well. The ducks are fairly routine, although the do a good job of synchronizing action like the skeletons did in The Skeleton Dance. The chicken fight is rather amusing because one chicken has to take a break to lay an egg in the middle of the fight. But the one and only appearance of Patricia Pig as the opera singer has a couple of funny gags. 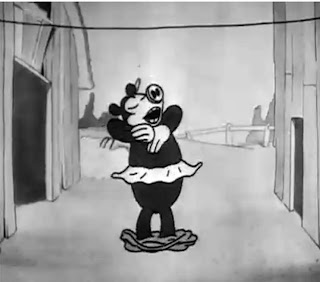 First, as she continues to sing, her bloomers keep falling down. It’s very amusing even as it repeats. The second is that her singing is so bad it prompts the audience to boo her off stage, but she can’t take the hint. A mouse lowers himself down on a hook, grabs her, then signals a cat with a donkey off to the side at the other end of the rope he has attached to Patricia. What’s funny is that rather than push the donkey farther away to pull Patricia up, the cat turns the donkey’s tail into a crank and turns the donkey into a winch. It’s that little unexpected touch that is quite humorous, and a great turn from the animators.

Finally, though, the headliner of this short is Mickey Mouse singing his “theme song” as the card before his act lets us know. He proceeds to give us a full rendition of “Minnie’s Yoo Hoo,” which would be the opening music of his shorts for many years until the Mickey Mouse Club March came into popularity in the 50s. 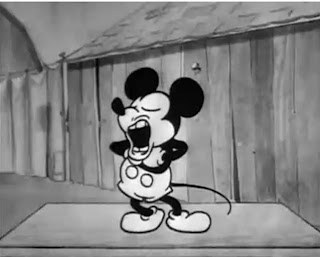 In our last Mickey short, The Karnival Kid, I wrote about Mickey’s voice, and his squeaking tones that Walt supplied. In the comments (you must read those, people!) we debated whether it was actually Walt or Carl Stalling who supplied the voice. I have to say, after hearing this, it sound like Stalling to me, because the singing here does not sound like Walt.

Regardless, “Minnie’s Yoo Hoo” is one of my favorite Disney songs, although it’s seldom used today. Like I mentioned before, my favorite version is the Main Street Saxophone Quartet, but there are several others. This, though, was the first, and the first time I’ve seen Mickey belt out a tune. It’s very entertaining, although the vocal version is a little slower time than the instrumental version, which I prefer. Regardless, “Minnie’s Yoo Hoo” makes Mickey’s Follies a winner for me.
Posted by Ryan at 5:56 PM